Sean Maguire headed home his first goal for Preston North End against Barnsley at Deepdale, while Richie Towell fizzed in a 90th-minute winner on his full debut for Rotherham to break Bury hearts.

Maguire moved across the water from Cork City in July and has made a good start with the Championship side.

He scored a fine individual effort in pre-season against Sheffield Wednesday and got his first competitive goal 23 minutes into Saturday's clash.

That's how it stayed, though Maguire almost struck an injury-time winner when his effort was tipped over by Adam Davies.

Daryl Horgan was left on the bench throughout, with both Maguire and Alan Browne playing the full 90.

90| GOAL! - Home debutant Towell lashes one in from the edge of the area to send AESSEAL New York Stadium into raptures! 3-2. #rufc pic.twitter.com/HziZ4KOm2K

Towell has endured a hugely frustrating year and and a half.

After moving to Brighton and Hove Albion from Dundalk on the back of his phenomenal goalscoring form in the Airtricity League Premier Division, injuries and fierce competition saw the midfielder mostly kicking his heels on the bench.

The Seagulls did renew his contract in the summer though and it's hoped a loan move to League One Rotherham will kickstart his career.

Towell came on in injury-time in last week's 1-0 win at Portsmouth and was introduced off the bench on Saturday with 40 minutes gone, replacing the injured Shaun Cummings.

With the teams level at 2-2 heading into injury-time, the Dubliner made his mark, showing real composure to drill home from the edge of the box and immediately endear himself to his new fans. 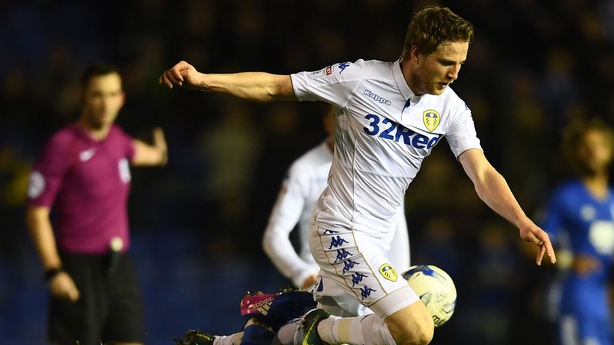 Meanwhile Eunan O'Kane helped Leeds United rise to second in the Championship with an emphatic victory.

Leeds moved to within two points of leaders Cardiff after a third consecutive victory arrived courtesy of a 5-0 dismantling of Burton.

Pierre-Michel Lasogga latched on to a terrific O'Kane through-ball and drilled past Stephen Bywater after 20 minutes and Kalvin Phillips curled home a quarter of an hour later before Pablo Hernandez put the hosts out of sight just before half-time with a penalty after Lasogga had been fouled by Jake Buxton.

Kemar Roofe's long-range effort nine minutes after the restart and Lasogga's second of the afternoon just before the hour mark added gloss to the scoreline on a memorable day for Leeds.