Lionel Messi scored a hat-trick as Barcelona made it three La Liga wins from as many games with a 5-0 thrashing of city rivals Espanyol at the Nou Camp.

Defender Gerard Pique and Luis Suarez added late goals, the latter set up by debutant Ousmane Dembele, as Barcelona maintained the only 100 per cent record in the division.

Messi broke the deadlock after 25 minutes as he collected a through-ball from Ivan Rakitic to fire home.

Messi added a second after he burst forward and his pass rebounded to Jordi Alba. Alba cut the ball back and Messi was in the right place to stab it wide of goalkeeper Pau Lopez.

Espanyol's Pablo Piatti was unlucky not to pull a goal back when his sweetly-struck left-footed volley came back off the post just before half-time.

Messi completed his hat-trick after 65 minutes as he was in the right place to fire home from Alba's cut-back.

With four minutes to go Pique rose highest to head in a corner from Rakitic. Substitute Dembele set up Suarez for the fifth with a low cross which the Uruguayan slid back across goal into the right corner to complete the rout. 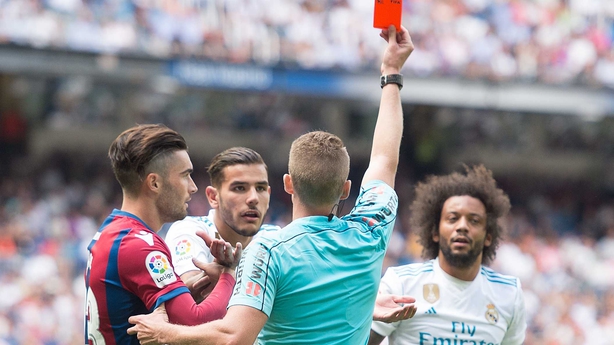 Reigning champions Real Madrid dropped points for the second game in a row as Ivi's early opener earned Levante their share of the spoils from a 1-1 draw at the Bernabeu.

Zinedine Zidane's men were held by Valencia before the international break and Lucas Vazquez's first-half response was only enough for another draw upon the resumption of the league.

Such was Real's frustration at their inability to break down Levante's stubborn defence - marshalled superbly by goalkeeper Raul - that wing-back Marcelo was sent off at the death.

The home defence, with Sergio Ramos returning, fell asleep in the 12th minute when Ivan Lopez's long throw-in evaded them all to find Ivi, who just needed to stick out a leg and poke the ball home.

The Valencians could not put further daylight between themselves and Real, though, and Vazquez's equaliser in the 36th minute dampened their spirits after a bright first-half showing.

Real's bid to snatch a late winner suffered a blow when Marcelo lashed out to earn a red card. Toni Kroos almost cut through the gloom to clinch it when he rattled a post deep into stoppage time. 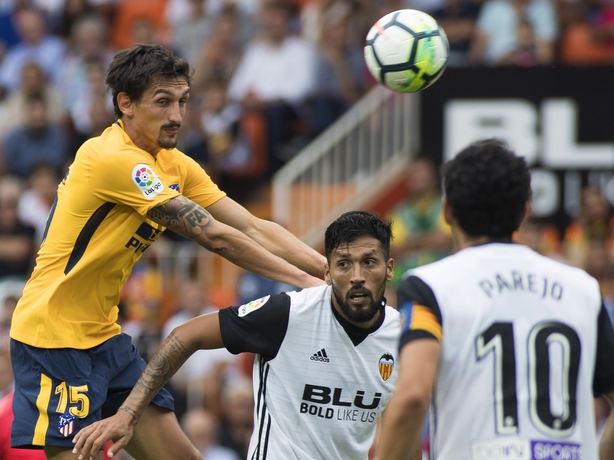 Valencia and Atletico Madrid both protected their unbeaten records after a goalless draw at the Mestalla.

Diego Simeone's Atletico enjoyed the better chances to force the issue, with Angel Correa and Luciano Vietto going close in the first half before Nicolas Gaitan was denied on the hour mark.

With time ticking away, Martin Montoya missed an opportunity to clinch it for Valencia as Jan Oblak parried his effort from the middle of the box.

Sevilla dominated Eibar at the Sanchez Pizjuan to win 3-0. However, it took the Andalusians until the 46th minute to score, with Ganso rifling home.

Wissam Ben Yedder kept up his hot streak in front of goal by tapping in a Pablo Sarabia cross. Nolito's late effort rubber-stamped the result.