Celtic's 4-1 win over Hamilton on Friday night was "great preparation" for the visit of Paris St Germain, according to boss Brendan Rodgers.

There were 5,208 fans inside the SuperSeal Stadium to see the treble winners turn on the style on the artificial surface, especially in the first 45 minutes.

Midfielder Stuart Armstrong opened the scoring in the 17th minute with a curling shot before striker Scott Sinclair added another two before the break.

Debutant Odsonne Edouard - the 19-year-old striker on loan from PSG - added a fourth following a clever one-two with Patrick Roberts, back for a second loan spell from Manchester City, before Accies substitute Alex Gogic headed in a late consolation.

The Hoops remain unbeaten domestically since May 2016 and Rodgers, looking ahead to Celtic's Champions League opener against the free-spending French side at Parkhead on Tuesday night, said: "We made the game look very simple but we worked very hard. 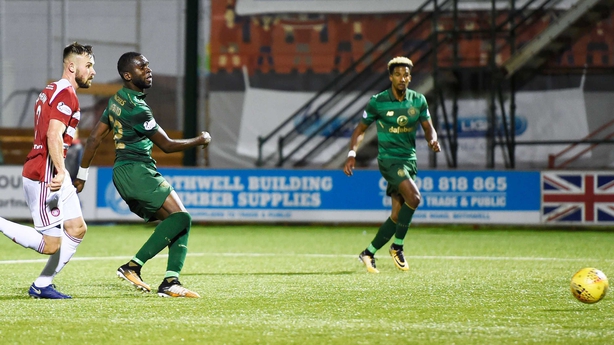 "The constant moving of the players, the pressing and the scoreline of course always gives you that confidence.

"Now we go on to take on one of the best teams on the planet and that is going to be a really exciting game for us.

"It was a great preparation mentally and physically and we will prepare well for it.

"There might not have been so many people watching on Friday night.

"The world will watch on Tuesday but that was our biggest game because it was our next game and we had to win and perform well and take the confidence into Tuesday.

"The contrast is the beauty of working here in Scotland.

"I enjoy going to the different areas of the country, playing on different surfaces, with parts of the ground filled or not filled.

"We have the comfort of home which is an amazing stadium with passionate supporters. Of course, it will be totally different but Accies was a big game for us."