Stephen Ward has challenged the Republic of Ireland supporters to call upon the spirit of their shock victory over Germany to re-ignite their World Cup qualifying campaign.

Martin O'Neill's men face Group D leaders Serbia at the Aviva Stadium on Tuesday night having allowed them to ease two points clear as a result of the Republic's 1-1 draw in Georgia and the Serbs' 3-0 win over Moldova on Saturday.

With Wales having reduced the gap to second-placed Ireland to two points courtesy of their home victory over Austria, the group is reaching crunch time with just three games each remaining.

However, O'Neill's side found itself in a significantly less advantageous position in their Euro 2016 campaign in October 2015 as reigning world champions Germany arrived in Dublin for the penultimate round of fixtures and to the surprise of almost everyone, left on the wrong end of a 1-0 scoreline.

And full-back Ward is hoping for more of the same.

He said: "Listen, we need a big night on Tuesday. We need to put a performance in for the fans and make it a big atmosphere against a good Serbian side.

"It's still in our hands - if we win three out of three games now, we'll qualify. We have been in situations before where we have had to bounce back, so hopefully we can all recover quickly, get the bodies right and put in a much better performance on Tuesday."

That famous win over Germany ultimately secured a play-off berth for Ireland as they mounted an irresistible late surge, and it seems likely that will be the best for which they can hope this time around if they do not beat Serbia. 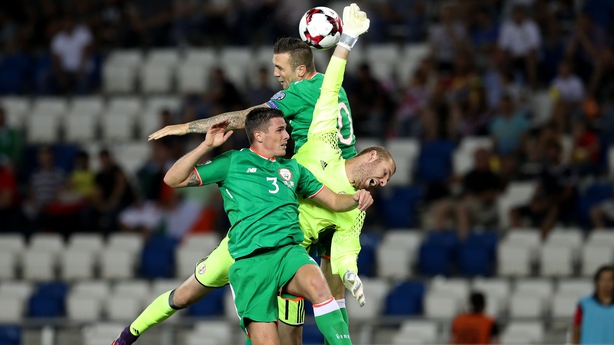 Saturday's draw in Tbilisi - the first time Ireland have not beaten Georgia in their nine meetings to date - was disappointing for many reasons, none more so than the fact that they took a fourth-minute lead through central defender Shane Duffy's first senior international goal.

However, not only did they not build upon it, but turned in so abject a first-half display that Valeri Kazaishvili's 34th-minute equaliser was the least the Georgians deserved on a night when they played by far the better technical football.

The visitors improved after the break and James McClean and substitute Aiden McGeady both had late chances to win it as Vladimir Weiss' men tired, but justice would hardly have been served had either of them done so.

Asked what O'Neill's post-match assessment had been, Ward said: "Look, he was disappointed with the performance, especially in the first half.

"To get a lead so early was brilliant for us and it was disappointing that we couldn't hang on to that. But they're a good side. They have proved they can take points off teams and give teams a tough run in the games.

"The second half was improved and we had three good chances to win the game, but unfortunately one just didn't drop in for us.

"But he [O'Neill] knows we have got a big game on Tuesday and he wants us to get our heads around that. We have had some big nights at the Aviva recently and we need to have another one."

Should Ireland turn in as poor a display against Serbia, they are likely to be punished more ruthlessly, and Ward knows victory is really the only option.

He said: "That's common knowledge. We have given them a little bit of breathing space, but that can be overturned on Tuesday with a win for us, and that's what we need to look to do."