Chris Coleman remains undaunted by the size of Wales' World Cup task and admits he would not be bothered if they had to beat "Brazil, Spain and Germany" to reach next summer's finals in Russia.

Wales are playing catch-up in Group D with four points to make up on the top two of Serbia and the Republic of Ireland.

Coleman's side have four games left to claw back that deficit - Austria and Ireland at home and Moldova and Georgia away.

But the Wales manager is supremely confident that can be done, although maximum points might be needed to finish top or even claim a play-off spot.

"We can do it (win the last four games) and that's no disrespect to Austria, Moldova, Georgia and the Republic of Ireland," Coleman said ahead of Austria's visit to Cardiff on Saturday.

"If we get it right then there's nobody we need to fear. That's a definite."

"I know this is a statement, but I'll say it - it could be Brazil, Spain and Germany.

"I have that much confidence in our players and in our team, especially here in this (Cardiff City) stadium when it's full.

"If we get it right then there's nobody we need to fear. That's a definite.

"We don't have to be afraid of anyone. But we're only looking at one game.

"We've always done that and one game is always winnable, no matter who it is against." 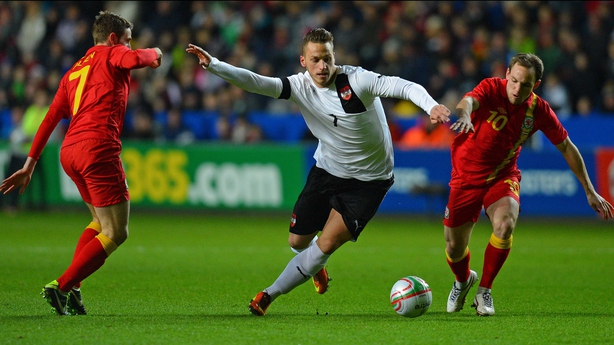 But there is a real knife-edge feel about this game as Austria are in the same position as Wales.

Austria also have eight points from six games, and Coleman admits the group situation will add to the occasion.

"These last four games are like a mini-tournament. They're do-or-die, depending on what the other results are," Coleman said.

"One of us could be dropping out if it's a negative result, so I don't think either team is going into the game looking for a draw.

"Both teams have exciting players capable of scoring goals, so I can see an open game.

"A draw doesn't do either of us any good so you would imagine something will have to give.

"This was always going to be a tight group, with four similar and very strong teams, I feel it will go right to the wire."

Wales expect Aaron Ramsey to play after the midfielder suffered a kick to the calf in Arsenal's 4-0 Premier League defeat at Liverpool on Sunday.

Ramsey has not trained every day this week, but he did train on Friday and his presence is a boost for Wales with fitness concerns over Joe Ledley and Joe Allen suspended.

Ledley has been without a club since leaving Crystal Palace this summer and has not played since Wales drew 1-1 away to Serbia in June.

Coleman confirmed Ledley is not fit enough to play 90 minutes, but he has no concerns over Jonathan Williams after the Crystal Palace forward left the Wales camp on Thursday to make the long journey to Sunderland and complete a loan move.

"Jonny finished training and he was in a car straight up to Sunderland for a medical," Coleman said.

"He texted me to say it was all done and he arrived back at the hotel at five o'clock in the morning.

"He's going to be a little bit tired but we've got a light session and he'll be ready for the game. And we've got a smiling Jonny Williams, which is always a plus."