It's possible that Cork City could officially seal the League title on Friday night in Tallaght but they are dependant on Dundalk not beating St. Patrick's Athletic.

The public perception is that Cork have begun to huff and puff a little since losing Maguire to Preston North End. Still, they will surely labour over the line at some stage in the next few weeks.

A scratchy 1-0 win over Finn Harps in Ballybofey steadied the ship after recent home losses to Bohemians and Sligo Rovers. They followed that up with a thumping win over Athlone Town in the FAI Cup though given the well-publicised travails of the midland club this season it might be futile to read too much into it.

Shamrock Rovers bounced back after another disappointing loss to Derry City with two away wins in Limerick and Galway.

Still in a battle with Derry City for third spot, they will be anxious to avoid a raucous Cork City celebration on their doorstep this weekend.

Shamrock Rovers: Luke Byrne is sidelined with a hamstring injury, while Dave Webster is suspended. Stephen Bradley will have Trevor Clarke available after missing out on the Ireland Under-21 squad.

Cork City: Johnny Dunleavy and Alec Byrne are long-term absentees, while Stephen Dooley is a doubt as he recovers from a calf strain; the winger has returned to light training and will be assessed ahead of kick-off.

Stephen Bradley (Shamrock Rovers): "Cork have earned the right to win the league wherever they win it, whether it's Tallaght or wherever they play next week. People think it's a big motivation for us but I don't care. Obviously you don't roll over and say well done, you want to go and win the game.

"Anyone that comes to Tallaght we want to win, it doesn't matter if it's Cork or whoever. We've been very good here all year, other than Bohs."

John Caulfield (Cork City): "To score seven goals is always nice and it was good for a lot of the lads to get goals but, as I said before, I felt the confidence has come back into the team after the Finn Harps game. It is important for the run-in that everyone is back on form and the win at Harps has lifted the team.

"We know it will be difficult going up to Tallaght. We are in a great position; we have come from nowhere over the last few years and built a really strong squad with great players.

We need two wins, we have a difficult run-in and we have to earn it in the right way. For me, it is about keeping our heads down and making sure that we can get the results over the next number of weeks." 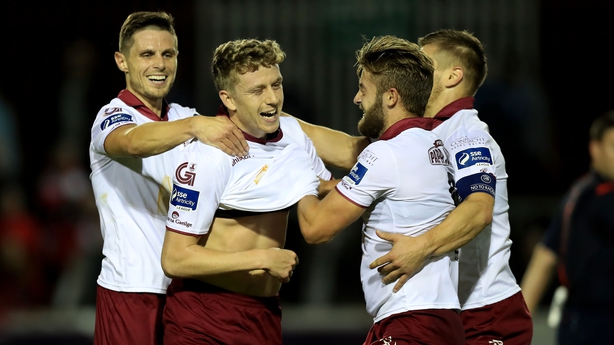 Galway United travel to Dalymount Park on Friday evening in serious need of a result. Things looked promising halfway through the last round of games.

Galway led Shamrock Rovers 1-0 at half-time while Sligo were involved in a daunting assignment in Turners Cross. By the time the final whistle blew, Shamrock Rovers had turned defeat into victory with two second half goals and Sligo grabbed an unlikely win in Cork.

Thus, instead of finding themselves free of the relegation spots, they are plonked in 11th spot and only ahead of Drogheda United who are already resigned to their fate. Still, Galway's recent form has been decent with wins over Drogheda and Finn Harps, as well as last weekend's superb 2-0 cup win over St. Pat's in Richmond Park.

They may still fancy their chances of putting a bit of spurt on him to nose ahead of their rivals.

Sitting in sixth spot and in the top half of the table, it's still inconceivable they be sucked into the battle, such is the congested nature of the table at this point. A win here and many will proclaim them safe. A defeat and their supporters may still have to fret.

Bohemians: Ian Morris (suspended) and Dylan Hayes (groin) are both out. Eoin Wearen (cruciate) remains out but it is thought he will resume full training this week.

Oscar Brennan and Paddy Kavanagh return to the squad after suspension as does Dinny Corcoran who missed the trip to Limerick due to family commitments.

Galway United: United captain Colm Horgan is suspended after accumulating five yellow cards, while Jonah Ayunga has been ruled out for the rest of the season with an ankle injury.

Marc Ludden, who missed last weeks win against St Patrick's Athletic with a knee complaint, is a doubt. Kevin Devaney was withdrawn after 30 minutes at Richmond Park with a groin strain and he is also doubtful for Friday's trip to Dalymount Park.

Keith Long (Bohemians): "Our lads want to deliver. We're the home team, so the pressure is on us to go out and perform.

"We've been disappointing in our last two games. We didn't hit the levels we had shown we are capable of, which was frustrating. We felt we left points behind us in Limerick but our performance wasn't what it should have been."

Shane Keegan (Galway United): "Last weeks result and performance against St Pats has given us a lot of confidence and we firmly believe that we can do it again in Dalymount Park on Friday," Keegan explained.

"Bohemians are arguably one of the highest achieving teams of the season when you look back at the pre-season predictions. They haven't really been involved in the relegation scrap.

"Bohemians are a bit similar to ourselves, they can blow hot and cold. They've beaten Shamrock Rovers and Cork City and lost games I'm sure they would've hoped to win.

"I don't think there is much between the sides and that was illustrated when we've met already this season. It's another big game for us." 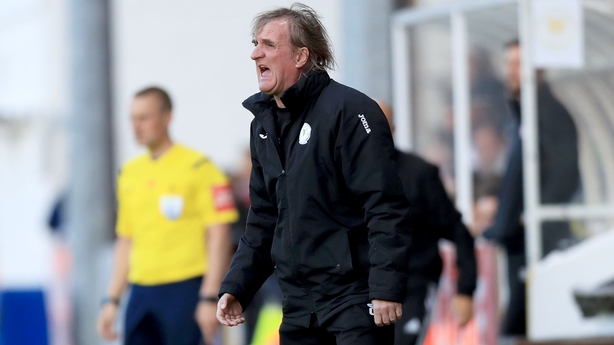 Finn Harps have only one victory in their last five games and that against crisis ridden Bray Wanderers. Ollie Horgan's side have been sucked into the relegation spots as the season begins to wind down.

They were level on points with St. Pat's before the sides met in Richmond Park a fortnight ago but the hosts eventually ran out 4-0 winners after a late goal blitz.

It was a more respectable scoreline in Ballybofey three days later but they still lost 1-0 to the League leaders and victories are required soon.

It's difficult to say that a win for Limerick tonight would lift them clear of danger for results have taken a highly unpredictable turn in the relegation battle in recent times.

Three dismal defeats to Dundalk, Derry City and Shamrock Rovers left them stuck in the mire but they followed that with a nourishing 1-0 win over Bohemians in Markets Field a fortnight ago.

A win could lift them into the top half of the table depending on the Bohemians result.

Finn Harps: Damian McNulty is extremely doubtful with a shoulder injury while Packie Mailey remains sidelined with a hamstring injury. Also ruled out are Caolan McAleer and Gareth Harkin because of suspensions.

Ollie Horgan (Finn Harps) "We’re up against it going to the Markets Field again after losing to Limerick in the FAI Cup last week. But this is league and we have to be brave and go for it as we need the points.

Neil McDonald has definitely steadied the ship with the league win over Bohemians a couple of weeks ago and they seem to have tightened up at the back which is going to make it difficult for us to break them down." 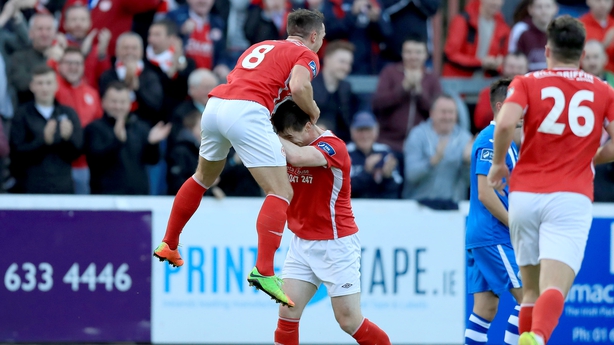 Dundalk's recent form indicates that Cork City's title winning party may be postponed for a couple of weeks at least. They cruised to a 3-0 win over Limerick in their last home game and followed that up with a 4-0 demolition of Derry City in Maginn Park.

The realisation that they were in a relegation battle prompted St. Pat's to dig deep and find some form.

After landing themselves in serious bother, Pats have taken 13 points from their past five League games, registering wins over Derry City, Drogheda United, Bray Wanderers and Finn Harps.

Three of those teams had hit troughs themselves and so Pats are due to meet a side in strong form this weekend.

Dundalk: Will be without captain Stephen O'Donnell once more as he recovers from his hamstring strain as does Robbie Benson. Jamie McGrath remains sidelined with appendicitis.

"St. Pats have been in very good form in the league, they’ve won a lot of their games and kind of pulled away from the bottom a little bit," the striker told dundalkfc.com. "They added a lot of experience in the transfer window in July so it’ll be a different side probably to what we faced earlier in the year.