There were tears in Spain and in France on Sunday night for the victims of the terror attacks in Barcelona, with Leo Messi and Neymar - formerly a darling of the Nou Camp but now expensively housed in Paris - showcasing their sparkling talents

Messi's 350th La Liga goal proved elusive as he hit the woodwork three times in Barca's 2-0 victory over Real Betis, but the Argentinean's brilliance illuminated the famous stadium on an emotional night in Catalonia.

The 30-year-old hit the post before the break and then twice afterwards with his latest landmark remaining frustratingly beyond his grasp.

However, an evening on which the club paid tribute to the victims of last week's terrorist attack in the city before kick-off ended in satisfactory fashion for the Catalan giants with Alin Tosca's own goal and a second from Sergi Roberto handing new manager Ernesto Valverde victory in his first league game at the helm.

That it was achieved without the departed Neymar and injured duo Gerard Pique and Luis Suarez - and without Messi finding the back of the net - may be a source of encouragement after a difficult start to the campaign. 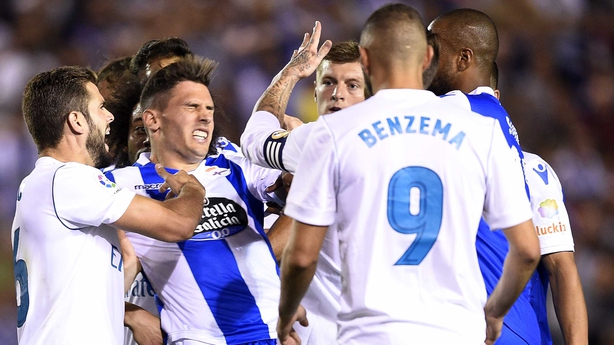 Skipper Sergio Ramos was sent off in stoppage time as Real Madrid opened their title defence with a 3-0 victory at Deportivo La Coruna.

Ramos was dismissed for a second bookable offence on a night when goals from Gareth Bale, Casemiro and Toni Kroos secured a comprehensive win without the suspended Cristiano Ronaldo.

However, it did not take the visitors long to slip into top gear and after keeper Ruben had spilled Luka Modric's 20th-minute shot, Karim Benzema squared unselfishly for Bale to open the scoring.

Ramos and Deportivo defender Fabian Schar were cautioned after a 53rd-minute clash off the ball which might have seen both dismissed, but the game was effectively over within eight minutes when Kroos swept home a third from the edge of the box.

Guilherme rattled the crossbar seconds later as the home side sought some consolation and Andone saw his 90th-minute penalty saved by Navas before Ramos was cautioned for a second time. 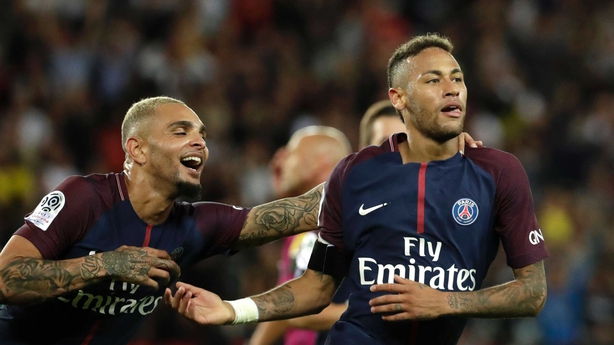 Neymar marked his home debut with two goals as Paris St Germain came from behind to beat Toulouse 6-2 at the Parc des Princes to go top of Ligue 1.

The Brazilian forward made it three goals in two appearances for his new club following his world record £200.6m arrival from Barcelona - after opening his account in the win at Guingamp last weekend - but it was another debutant who threatened to steal the headlines as Max Gradel gave the visitors a surprise lead.

Gradel, on loan from Bournemouth, pulled into space inside the penalty area and met Kelvin Amian's cross perfectly with a superb first-time strike.

Neymar clipped the outside of a post with a header but he would not have to wait much longer for his first home goal. It arrived after 31 minutes with a simple tap-in from close range after Adrien Rabiot's shot was parried by the goalkeeper.

Four minutes later, Neymar set up Rabiot to score with a 25-yard effort to send PSG into the interval in front.

PSG pushed for a third goal but it looked like their momentum would be rocked by Marco Verratti's red card - a second yellow for a foul on Christopher Jullien - midway through the second half.

However, the numerical disadvantage did not stop PSG, or Neymar, from being a threat as shortly afterwards he won the penalty which Edinson Cavani emphatically dispatched.

Toulouse refused to go down without a fight, though, and Jullien reduced the deficit after 78 minutes with a header that deflected into the net off Thiago Silva.

PSG were not finished and substitute Javier Pastore quickly restored the two-goal lead with a lovely curling effort from just outside the box. Kurzawa extended the lead in the 84th minute with a superb volley from a driven cross by Neymar, who put the icing on the cake in stoppage time with a trademark display of quick feet and trickery to beat two defenders and find the bottom corner of the net with a left-foot finish. 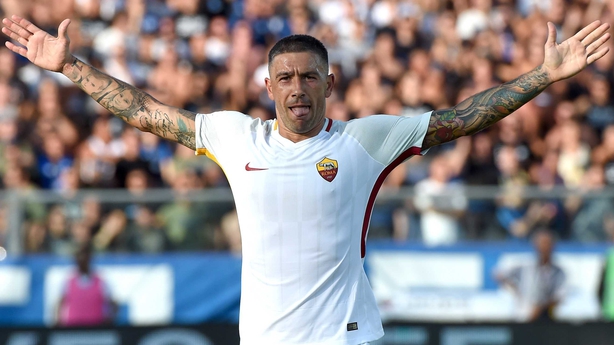 In Serie A, ex-Manchester City full-back Aleksandar Kolarov had a debut to remember for Roma, sliding a crafty free-kick under the wall to give his new team a 1-0 win at Atalanta in their opening Serie A game of the season on Sunday.

Kolarov is known for blasting free-kicks but this time he rolled it along the ground and fooled the players in the Atalanta wall who instinctively jumped and let it go underneath them.

Francesco Totti, who retired at the end of the 2016-17 campaign following 24 years as a Roma striker, watched from the stands in his new role as a director.

Academy product Patrick Cutrone was the standout performer in an AC Milan team chock-full of expensive summer signings as his goal and assist helped the ambitious Rossoneri thrash 10-man Crotone 3-0.

The match at Stadio Ezio Scida was an opportunity for Milan fans - especially those who missed last week's 6-0 demolition of Shkendija in the Europa League play-offs - to get a first glimpse of the likes of Leonardo Bonucci, Hakan Calhanoglu and Andre Silva, who have all signed up for a bold new era at San Siro.

However Silva, the striker purchased at a premium from Porto in June, did not start, with 19-year-old Cutrone preferred. Any disappointment among travelling supporters faded when, after Franck Kessie opened the scoring from the penalty spot, Cutrone headed his first league goal before deftly setting up Suso.

Crotone's task was made all the more difficult by the fact they lost centre-back Federico Ceccherini in the incident that allowed Kessie to notch from the spot.

The scoreline is the same one by which reigning champions Juventus beat Cagliari in Saturday's curtain-raiser and Milan will hope their determination to win a first Scudetto since 2011 has been effectively conveyed. Inter Milan are also hoping to return to former glories under Chinese owners and Mauro Icardi got them off to a strong start with a brace in their 3-0 home victory over Fiorentina.

The Argentinian forward boosted Luciano Spalletti's Inter into an early lead from the penalty spot and turned Ivan Perisic's assist home in the 15th minute. In the second half Perisic - a reported target for Manchester United - turned scorer to rubber-stamp the outcome.

Meanwhile in the Bundesliga, Hamburger SV forward Nicolai Mueller experienced the agony and ecstasy of the beautiful game all in a matter of seconds, injuring himself while celebrating a goal and now facing around six months out of action.

The club says Mueller tore a cruciate ligament in his right knee after scoring in Saturday’s league-opener, a 1-0 home win over Augsburg. Mueller attempted a pirouette before falling to the ground in apparent pain.

Sporting director Jens Todt says, "The diagnosis is a huge shock for us, a big blow for the start of the season and of course extremely bitter for Nicolai. We wish him a good recovery and will help him with that as well as we can."

Klaas Jan Huntelaar set Ajax on their way to a first Eredivisie victory of the season as the men from Amsterdam bounced back from last weekend's defeat at Heracles with a 3-1 win over Groningen.

Huntelaar opened the scoring with 38 minutes gone and midfielder Hakim Ziyech doubled the advantage three minutes after half-time with his 50th league strike.

Groningen gave themselves hope when Oussama Idrissi reduced the deficit with 17 minutes remaining, but Lasse Schone eased his team across the finishing line with a third.