The ‘what might have been’ and the ‘what should be’ future of Ireland’s midfield lined up side by side on Saturday as West Ham United faced Southampton at St Mary’s Stadium.

One-time Irish Granny Rule target Mark Noble was named in the middle of the park alongside Ireland Under-19 international Declan Rice, who was making his first start in the Premier League.

Rice made his West Ham debut at the tail end of the 2016-17 season and followed up an impressive pre-season by getting a decent run-out for 30-odd minutes against Manchester United at Old Trafford last week.

And manager Slaven Bilic put his full faith in the teenager for the trip to the south coast, elevating Rice into the starting XI as the Hammers looked to bounce back from last week’s 4-0 defeat in Manchester.

Rice was utilised in the holding role in front of the back four and looked immediately comfortable amongst the Premier League stars, surrounded by a wealth of experience in the West Ham line-up, surely tasked with ushering the young Ireland midfielder through his maiden match in the Premier League.

Alas, this perceived elite band of brothers, including a Euro 2016 champion, a 60-plus capped Austria international and Premier League winner, totally deserted the 18-year-old Rice in a calamitous first-half performance.

Noble was first to lead by bad example as he proved very fortunate to stay on the pitch following a horrendous, studs-up tackle, before the idiotic Marko Arnautovic got a well-deserved straight red card for planting his elbow into Jack Stephens’ neck. 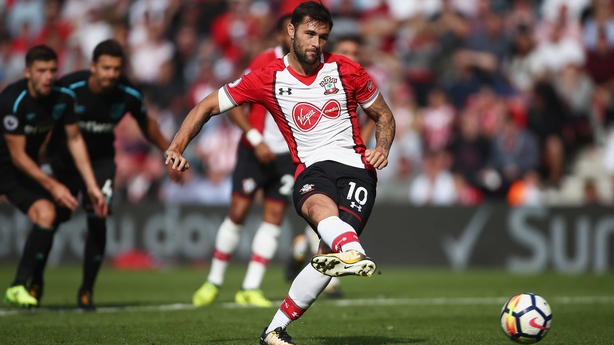 Minutes later, Jose Fonte offered a lesson in error-strewn schoolboy defending as Southampton were gifted their first penalty of the game, duly doubling their lead and leaving West Ham facing an uphill task to take something from the game.

Amidst the madness, Rice appeared unfazed and played a big part in the Hammers’ recovery as he dictated play, and players, from his deep position and gradually the East London side got back into the game.

Luckily for this motley crew of West Ham players, they possess one of the finest finishers in the business and Javier Hernandez pounced either side of half-time to drag Bilic’s side back into the contest.

Sometimes the best lessons are learnt from the mistakes of others and Rice will have an entire catalogue of entries to draw on as he begins to stake a claim for a permanent spot in the West Ham midfield.

And while his own players were showing him how not to play the game, Rice will, at least, have learned a lot from the opposing Northern Ireland international Steven Davis who performed with his usual calmness and composure in the heart of the Saints midfield all afternoon.

Rice bowed out of the action in the 76th minute, just moments after his side had restored parity and the youngster received a standing ovation from the travelling West Ham faithful, who appreciated his efforts throughout.

Young Declan Rice gave a solid performance during his 75 mins on the pitch which ended with a standing ovation from the travelling fans. dg pic.twitter.com/M6xeYd8Jsw

Of course, Rice’s introductory education would not be complete until he watched – from the bench – all his endeavours disappear swiftly down the drain as Pablo Zabaleta gifted the home side all three points, needlessly giving away a last-minute penalty.

To rub salt in the wounds, spot-kick taker Charlie Austin paid heed to Noble’s attempted distraction saying ‘he knows where you are putting it’ as the former QPR striker set up to take the penalty.

Austin changed his mind and slid the ball home as Joe Hart dived the 'right' way.

gutted to lose like that after working so hard to get it back! over the moon to have made my first start❤ the fans were unbelievable🙌⚒ #COYI

For Rice, there was nothing but excellent reports from the game and while the midfielder was not named in Martin O’Neill’s provisional squad for the upcoming World Cup qualifiers, another few Premier League performances in the middle of the park could see the manager revising that list ahead of the final cut.

The Match of the Day name-check from former Liverpool midfielder Danny Murphy will certainly have done his cause no harm at all.