Republic of Ireland U19 international Declan Rice made his first Premier League start for West Ham, but it ended in heartbreak as Southampton snatched a 3-2 win at the death.

The hosts had raced into a two-goal lead, ending their home drought at 556 minutes, as Manolo Gabbiadini and Dusan Tadic found the net.

Marko Arnautovic was red-carded for an elbow on Jack Stephens, while former Saints defender Jose Fonte conceded the penalty that allowed Tadic to put the hosts 2-0 to the good.

Javier Hernandez poached two goals to level the scores however, and Saints appeared to be heading for a frustrating draw. But Pablo Zabaleta fouled Maya Yoshida at the death, and Austin dispatched Saints' second spot-kick of the match, to seal the spoils. Rice played 76 minutes before being oreplaced by Pedro Obiang. 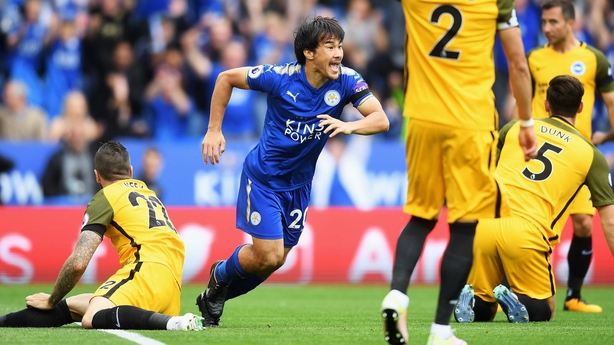 Shinji Okazaki [above] and Harry Maguire found the net for Leicester's 2-0 home win over Chris Hughton's Brighton, whose wait to get off the mark continues.

Okazaki handed the hosts the lead after just one minute, before former Hull defender Maguire's second-half goal wrapped up the win.

Hal Robson-Kanu came off the bench for James McClean to hit the winning goal but was later sent off as 10-man West Brom edged home 1-0 at Burnley.

Wales forward Robson-Kanu was dismissed for an elbow on Matt Lowton five minutes from time, and some 14 minutes after putting the visitors into the lead.

Jeff Hendrick, Stephen Ward and Robbie Brady all started for the hosts, with Jon Walters on the bench, and Hendrick went close to breaking the deadlock three times in the first half.

However Burnley's day ended in frustration and no points when Robson-Kanu pounced 19 minutes from time.