However, he admits that every player has a price and was not able to rule out the possibility of Evans leaving The Hawthorns.

Pulis confirmed at his pre-match press conference on Friday morning that West Brom had rejected a bid, reported to be £18million, from City for the 29-year-old Northern Ireland international.

Pep Guardiola has already spent upwards of £200million on new players this summer, including a handful of other defenders.

When asked about Evans, Pulis replied: "They made an offer and we've turned it down.

"I think every player is for sale at the right price. It would be crazy to say a team like West Brom won't sell if a team are going to put a huge amount of money in front of you.

"Market forces dictate but we don't need to sell and we don't want to sell, so we are not desperate for the money. Jonny is one of our best players and we'd love him to stay.

"It would need to be a very good offer. If that offer came in then we would sit down and talk to Jonny."
Evans was the subject of a bid from Arsenal last summer while Leicester have also had an offer for the player turned down during this close season.

"He's been in this position before here and he understands the situation, until all parties agree then he won't go anywhere," said Pulis.

"He has been made club captain and he wants to get on with his football."

Evans missed West Brom's opening game of the season against Bournemouth with a hamstring injury and the centre-half remains a big doubt for the trip to Burnley on Saturday.

"He has got an injury at the moment, he will have a late fitness test today. One thing we don't want to do is play him and then it gets worse and then we lose him," said Pulis.

Meanwhile, Pulis also confirmed that West Brom are interested in signing Tottenham defender Kevin Wimmer although he said that reports of an agreement being close were wide of the mark.

"Whoever is saying it is close is miles away from that fact," he said. "We've got a lot of irons in the fire and we hope to get deals done and they have to be right for the football club." 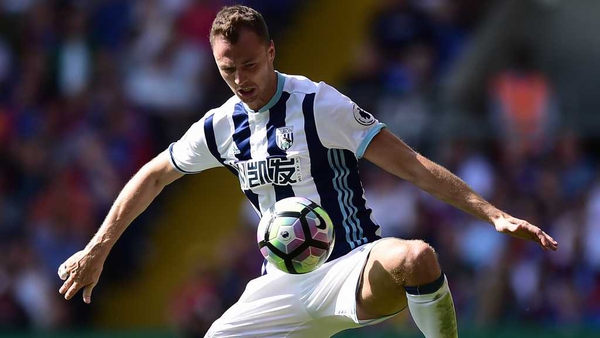