Sevilla boosted their hopes of reaching the Champions League group stages for a third successive season with a play-off first-leg 2-1 win at Turkish side Istanbul Basaksehir.

The home side, appearing in their first Champions League game, fell behind to Sergio Escudero's first-half opener and although Eljero Elia fired Basaksehir level in the 64th minute, Wissam Ben Yedder struck a late winner for Sevilla.

Nice endured a miserable return to European football's premier competition after having two men sent off in a defeat at Napoli.

The French side, who last appeared in a European Cup campaign in 1960, fell behind to Dries Mertens' strike early in the first half before Jorginho's penalty made it 2-0 to the Italians following Christophe Jallet's foul on Mertens.

Nice's Vincent Koziello was shown a straight red card for his dangerous tackle on Piotr Zielinski and less than a minute later Alassane Plea was dismissed for his second yellow-card offence. 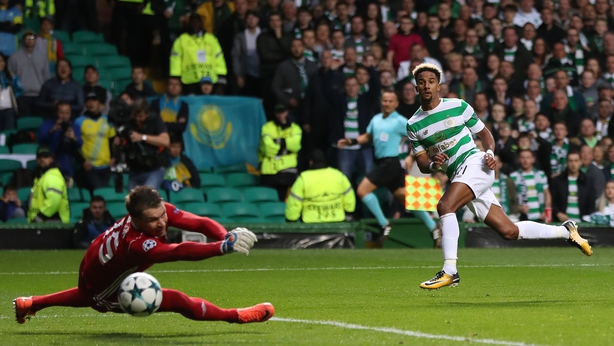 Scott Sinclair bagged a brace as Celtic cruised to a 5-0 win against Astana.

Sinclair scored either side of half-time during an impressive display by the Scottish champions after Evgeni Postnikov's own goal had given them the lead.

James Forrest crashed home Celtic's fourth and with Astana - winners of three straight domestic titles in Kazakhstan - in disarray, Brendan Rodgers' side added a fifth in the closing stages through another own goal from Igor Shitov.

Their win is the biggest-ever margin of victory for a home side in a Champions League play-off match.

Israeli side Hapoel Be'er Sheva are on course to reach the group stages for the first time after they hit back to beat Maribor 2-1.

Olympiakos will defend a 2-1 lead in Croatia next week courtesy of Jacques-Alaixys Romao's stoppage-time winner against Rijeka.

Vadis Odjidja-Ofoe's rising drive cancelled out Heber's opener for Rijeka just before the interval and Romao's header in the third minute of stoppage time snatched victory for the Greek champions.

CSKA Moscow took a slender 1-0 lead back to Russia thanks to a comical own goal by Young Boys' Kasim Adams Nuhu.

The Ghanaian midfielder attempted to play the ball back to his goalkeeper from well outside his penalty area, but when his first header fell short he promptly directed another header over David von Ballmoos and into the net.