John Mountney hit a brace as Dundalk ran riot against Derry City at Oriel Park to book their place in the next round of the FAI Cup.

The Lilywhites have won on each of the 11 occasions that Mountney has scored for the club and his brace here, which included the opener after just 42 seconds, played a huge part in deciding the outcome of a cracking cup tie.

A David McMillan penalty and a late Michael Duffy effort gave the scoreline an emphatic look but Derry certainly played their part in a cracking cup tie and Candystripes boss Kenny Shiels will look back and wonder what might have been if Aaron McEneff's first-half attempt had ended up in the net rather than come crashing back off the post.

Shiels was left stony-faced after watching his side fall behind so early on.

Sean Gannon burst onto a Patrick McEleney pass on the right and his cross was swept home at the near post by Mountney with less than a minute on the clock.

Stephen Kenny's side went for the kill after that and they were in  again after nine minutes. McEleney's pass fell kindly into Michael Duffy's path on the left but his cross just evaded a host of white shirts in the six-yard box. 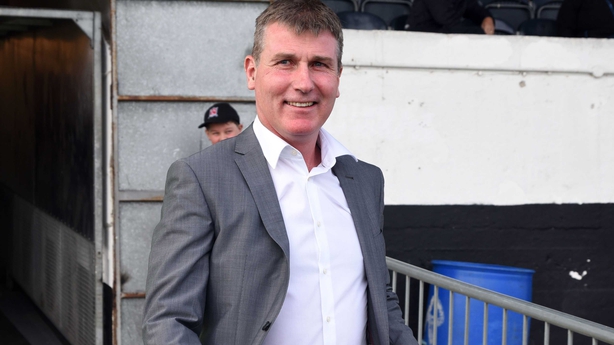 McEleney was at his brilliant best in the opening period, producing an array of eye-catching passes. One of his simpler ones picked out Duffy in space but the former Derry City winger couldn't keep his powerful drive on target.

The visitors struggled to get a grip on things and Duffy cut in from the left again to bend a drive at goal but, again, his effort lacked accuracy.

Derry eventually managed to get some sort of a foothold in the game and they were given a sighting of goal in the 23rd minute when Barry McNamee was taken down by Brian Gartland but Nicky Low's free-kick had too much height.

Dundalk had a similar opportunity three minutes later. Mountney's run inside was cut short by Darren Cole with Duffy's subsequent free kick kissing the top of the crossbar.

The lively winger went close with another attempt, his fifth of the first half, and it looked like Dundalk would pay a heavy price for the missed chances when McEneff let fly with a stunning effort, only to see it smack the woodwork with Gary Rogers beaten. 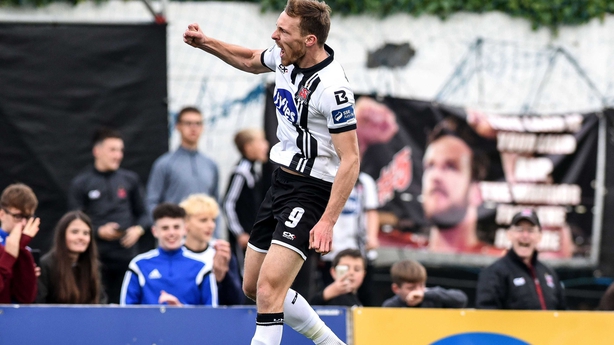 Lucas Schubert turned the rebound wide of the upright and Dundalk, even though they dominated much of the half, were slightly fortunate to go in ahead at the break.

The hosts were handed another warning after just three minutes of the second half when Barry McNamee pounced on a mistake by Robbie Benson but he pulled his effort wide of the goal.

That miss, along with McEneff's first-half attempt, came back to haunt Derry as Dundalk extended their lead in the 51st minute.

David McMillan was tugged back by Dean Jarvis as he tried to make contact with a Brian Gartland header and the striker made no mistake from the spot, burying his penalty past Ger Doherty.

That looked to have ended Derry's hopes but they almost hauled themselves back into it on the hour mark when Lucas Schubert broke from right-back to find himself in on goal but he was stopped in his tracks by a fabulous last ditch tackle from ex-team-mate Niclas Vemmelund.

Substitute Jozef Dolny then warmed the palms of Rogers as the visitors pushed for a goal and the tie showed no signs of fizzling out as chances continued to arrive at both ends.

Doherty made a fantastic save to stop Benson from putting the game to bed in the 66th minute, the Lilywhites midfielder seeing his goalbound effort from a Duffy pass clawed out by the Derry goalkeeper.

Play switched to the other end and Dane Massey was in the right place at the right time to pop up on the Dundalk line and stop McNamee from making it 2-1.

The outcome was finally decided with nine minutes to go when Mountney's low drive arrowed into the bottom corner of Doherty's net.

And Duffy put the icing on the cake when he ran onto a through ball by substitute Thomas Stewart to grab a deserved goal and book Dundalk their place in the hat for this evening's draw.