Sergio Aguero was on target as Manchester City denied Brighton any hope of a shock on their Premier League debut.

Pep Guardiola's side, for all their riches, took time to get into their groove in a 2-0 win at the Amex Stadium.

But the moment they did it was ruthless as striker Aguero converted 20 minutes from time. 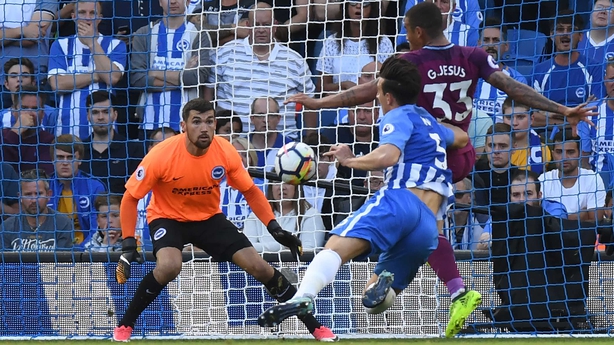 ew Ryan grasp and into his own net soon afterwards as City prevailed after previously being frustrated.

There was some intricate build-up play and Gabriel Jesus twice found the Brighton net only for the strikes to be ruled out, once for handball and once for offside.

The Brazilian also had a point-blank header saved by Ryan before City's late burst.

Twenty years after facing extinction and following a 34-year absence from the top flight, Brighton are a Premier League club.

The Seagulls had more recent history with City, knocking them out of the League Cup on penalties at the Withdean Stadium.

That was in September 2008, in the early days of City's Abu Dhabi ownership, which bank-rolled the signing of five players for £200m this summer.

Guardiola, who hopes the lavish expenditure will be a one off, fielded three of his new boys from the start.
Full-backs Kyle Walker and Danilo played as wing-backs and Ederson was a virtual spectator in goal for much of the contest. 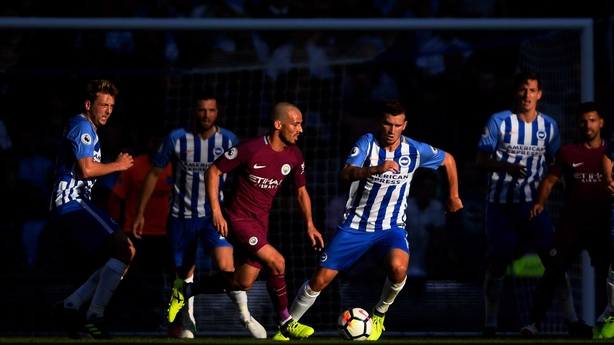 City, as expected, dominated possession and hemmed Brighton into their own half.

Yet it took until the 17th minute for the visitors' first strike on goal, when Kevin De Bruyne's free-kick was hit straight at Ryan, Albion's new goalkeeper.

City had the ball in Brighton's net after 27 minutes, but it was disallowed.

Jesus bundled in following David Silva's lofted pass, but replays showed the ball went in off his right hand.

Jesus was booked as he received treatment following a clash with Ryan.

Jesus should have scored with a header when Aguero clipped the ball over from the right, only for Ryan to make a fine save as he was diving the wrong way. Bruno did enough to prevent Jesus poking in the rebound.

Brighton made rare forays into City's half and had one good chance as the interval approached.

But Jamie Murphy - on for Chelsea loanee Izzy Brown, who hobbled off after 23 minutes - could not bring down a diagonal pass.

Jesus had the ball in Albion's net six minutes into the second half, but again there was an infringement. 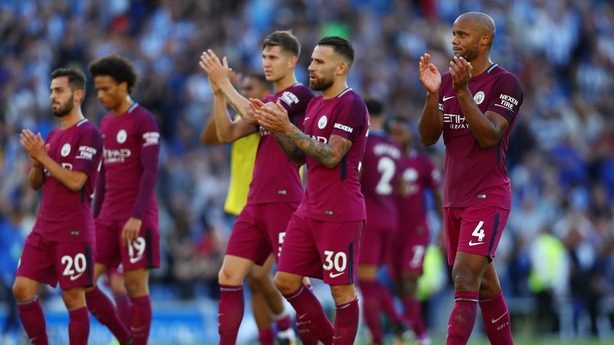 Fernandinho's pass was centred by David Silva, who had run by an offside Aguero, and Jesus netted, but the strike was ruled out.

Next Aguero tried to bulldoze his way through three Brighton defenders and Republic of Ireland international Shane Duffy barely kicked an intended back-pass.

Aguero rushed his shot, lifting the ball off target.

Brighton sensed an opportunity. Murphy led a counter-attack and, from a corner, Duffy's shot deflected wide.

Ederson flapped at another corner and Propper blasted a 25-yard effort wide. That series of set-pieces was as good as it got for Chris Hughton's side.

City appealed for a penalty when a De Bruyne shot struck the hand of Dunk, whose arm was stationary by his side. Referee Michael Oliver was unmoved.

And the visitors struck when De Bruyne stole the ball from Dale Stephens.

The Belgian playmaker found David Silva, who in turn fed Aguero. And the striker did the rest, finishing across goal in trademark fashion.

City, who sent on Leroy Sane, Raheem Sterling and Bernardo Silva as second-half substitutes, continued to apply pressure and worked the ball for Fernandinho to cross towards Jesus. But it was Dunk who headed in.