Arsene Wenger is relieved Olivier Giroud opted to stay at Arsenal this summer after the striker scored the winner in Friday's Premier League opener against Leicester.

The France international came off the bench to head home in the 85th minute as the Gunners started their season with a thrilling 4-3 win.

Giroud's compatriot Alexandre Lacazette marked his league debut with a goal in just 94 seconds, only for Shinji Okazaki to level for the Foxes less than three minutes later.

Jamie Vardy then struck twice, either side of a Danny Welbeck equaliser, as the 2015-16 champions looked for a first league win over Arsenal since 1983.

But it was not to be.

Aaron Ramsey came off the bench to level with eight minutes remaining before Giroud wrapped up the points. 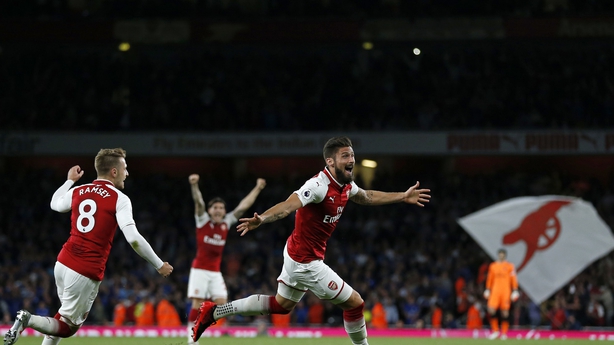 The 30-year-old has been linked with West Ham, Everton and Marseille since the arrival of club-record signing Lacazette.

Wenger admitted he had given the former Montpellier man the chance to leave but is delighted he opted to stay put.

"It is fantastic," Wenger replied when asked about Giroud's willingness to fight for his place.

"You know, I must say I opened the door for him at some stage because I know that it's important for him to play.

"But I don't want him to go and in the end he decided to stay and it was one of the days of recent weeks for me because I know how important he is.

"Not only as a player, he is a fantastic player, but as well in the group. He has a big weight in the squad and it was a relief for me that he decided to stay."

Pushed on whether he thought Giroud could leave before the transfer window closes on August 31, Wenger replied: "No. It's a determined no."

Leicester boss Craig Shakespeare was good on his word and started Riyad Mahrez, despite the fact the Algeria international has asked to leave the club.

"I think we have all seen the funny business of the transfer window and we never know what is round the corner. Riyad has been very focused"

Mahrez, who has been linked with a move to Arsenal in the past 12 months, had been a target for Roma.

The Serie A side have now said they will not return with an improvement on the offer that was rejected and, while he remains a Leicester player, Shakespeare is more than happy to utilise the 2016 PFA Player of the Year.

Asked whether Mahrez would be at the club when the window closes, the Foxes boss said: "Who knows?

"I think we have all seen the funny business of the transfer window and we never know what is round the corner. Riyad has been very focused.

"He came out and made a statement which we are all aware of but while he trains and plays and is professional the way he is, he will be considered for selection."