An English football first followed as the 'ABBA' penalty shootout was deployed and the Gunners prevailed 4-1 to extend their winning record at Wembley to nine straight games, including two in penalty shootouts.

The 'ABBA' system is based on the format used in tennis tie-breaks, with the team taking the first kick in each pair of kicks alternating.

Arsenal celebrated and Chelsea looked on, just as they had done in May when the Gunners beat them in the FA Cup final.

It had been an even contest.

Victor Moses' strike one minute into the second half was cancelled out by Sead Kolasinac's header eight minutes from time. Both benefited from defensive lapses. 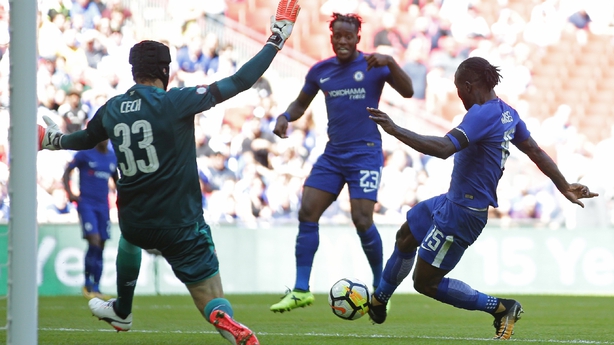 The Gunners' equaliser came moments after Pedro was sent off for a tackle from behind on Mohamed Elneny and was no less than Arsenal deserved after Alexandre Lacazette hit the post in the first half.

Alex Iwobi's direct running twice forced Courtois to be alert, while Danny Welbeck headed at the goalkeeper, who was beaten by Lacazette only for the striker to see the ball rebound off the post.

Per Mertesacker had to go off after 30 minutes, struck by Gary Cahill's flailing arm in the Arsenal box. On came the second of Arsenal's summer signings, Kolasinac.

Chelsea's first attempt of note came on the counter-attack as Pedro - wearing a face mask following the facial injury sustained between the teams in last month's friendly in Beijing - stretched the Gunners. Petr Cech was equal to his shot.

Willian was adjudged to have dived in the Arsenal box after Hector Bellerin had mis-controlled. On another day it would have been a penalty. The Gunners were reprieved once again.

Iwobi attempted to run through Chelsea and shot at Courtois before Welbeck scooped the ball well over.

Chelsea took the lead within moments of the restart. Granit Xhaka sent Cesc Fabregas' corner looping into the air and Cahill met the ball on the edge of the area.

Cahill headed the ball into the box and Moses was lurking. He took one touch on his chest and then slipped the ball in.

He finished well before celebrating with a dive - a reference to his sending-off in the FA Cup final which will see him miss Saturday's Premier League opener with Burnley through suspension.

Elneny fired over soon afterwards as Cahill only half-cleared a Bellerin cross.

Morata, on for Michy Batshuayi, then met Willian's improvised cross, but all he could do was slice it off-target.
Pedro was sent off after catching Elneny and Arsenal scored from the resulting free-kick, Kolasinac converting a free header from Xhaka's pass.

Morata was offside when he headed Fabregas' late free-kick wide as the match went to penalties and Arsenal extended their winning record at Wembley.