Jose Mourinho hailed new signing Nemanja Matic "a genius" as the holding midfielder made his Manchester United debut, but it was another former Chelsea star, Jaun Mata, who netted the winner in a 2-1 victory over Sampdoria in Dublin tonight.

Matic started for the Red Devils at the Aviva Stadium following his £40million switch from Premier League champions Chelsea.

"He needs time but experience, intelligence, a genius in the way he thinks - he thinks football," Mourinho said.

"We will help him to be ready sooner rather than later."

United opening the scoring in the first half when Henrikh Mkhitaryan headed home at the far post after a lightning break that stemmed from a charged-down indirect free-kick on the edge of their own six-yard area. 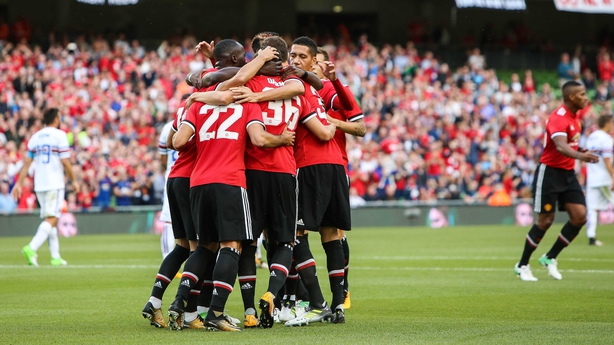 Substitute Mata got the winner with 10 minutes left, coolly side-footing in from the edge of the penalty area.

He added: "To get three out of four I thank the club for that, I will be happier if they get me four of four but they did a great effort for me."

After the game, Mourinho also described the two-game ban handed to Phil Jones for a breach of UEFA's anti-doping regulations as "very unfair".

Defender Jones has been suspended for two matches for verbally abusing a doping control officer after being selected for testing following the Europa League final win in May.

The player was upset at having to miss out on celebrations and a squad photograph paying tribute to victims of the Manchester terrorist attack.

His manager said the anti-doping authorities should have taken into consideration the significance of the occasion and allowed him some time to celebrate with team-mates.

"It's not a normal match, it's a final, it's a cup, it's a medal, it's the celebration, it's everything," Mourinho said.

Mourinho said he will leave the decision on whether to appeal against the ban to Jones himself, noting that he ran the risk of getting it extended if the appeal failed.

@MrStephenHowson The @ManUtd team bus has just been clamped in Dublin... Madness... pic.twitter.com/OLxXJq7BIl

Prior to the game, a mischievous car clamper had fans fearing Manchester United might be late for the match when a picture appeared on social media of the team coach with a clamp stuck on the back wheel.

However, the incident proved to be a prank.

It appears one man seized the chance for a photo opportunity.

He attached the clamp momentarily on the luxury bus, which was correctly parked, to secure a picture that delivered his 15 minutes of fame on social media.