In a lively start, recent signings Sean Russell and Chris Mulhall both tried their luck from long range for the Drogs without success but the home side were lucky not to concede after three minutes.

Killian Brennan, who left his home-town club recently to return to Richmond Park, lofted a corner kick to the edge of the 18-yard box, from where Kurtis Byrne shot off the crossbar.

Coming up to the 13-minute mark, Pat's gifted their hosts a great opening when Lee Desmond presented the ball to Thomas Byrne, who scuffed his shot into the hands of Conor O’Malley.

Immediately, Drogheda had another let-off when Conan Byrne attacked the right flank and crossed for Christy Fagan to hit the bar.

However, within seconds the same combination struck for the opening goal as Byrne centred for Fagan to apply an easy finish.

Drogheda rolled up their sleeves as they desperately sought an equaliser, but in the remaining half-hour in the first period they failed to create a single opening and the visitors almost put the result beyond doubt just before the break when Conan Byrne’s floated header was stopped on the line by Drogs centre-half Lloyd Buckley. 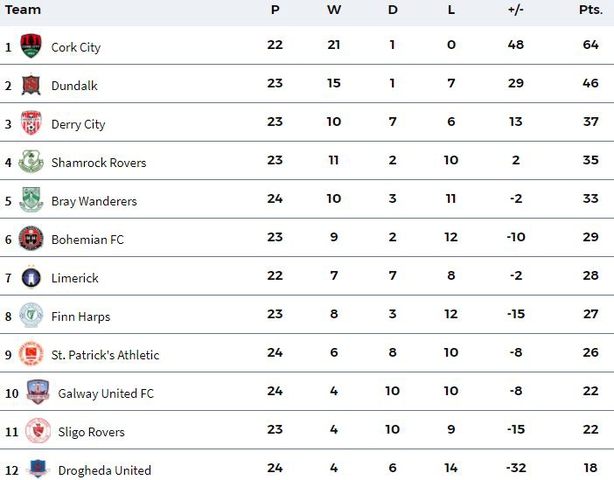 The interval came at a good time for the basement side and on the restart they had more possession in the final third, but O’Malley remained untested by the hour mark as Russell fired over the bar from distance.

Fagan had an opportunity to settle it on 68 minutes when Kurtis Byrne picked him out in the six-yard area but the striker headed weakly into the hands of McGuinness.

Then it was the two Byrnes who combined, with Kurtis teeing up Conan. He fired straight at McGuinness from inside the six-yard box.

There was an anxious moment for Pats fans on 76 minutes when Drogheda won a free kick 25 yards out on the right and Russell’s whipped left-footer almost caught out O’Malley at his near post.

And right at the death Adam Wixted’s piledriver was tipped onto the bar by the keeper to deny Drogheda an equaliser.