Wayne Rooney's Everton return threatened to turn into embarrassment before captain Leighton Baines struck to give his side a slender first leg lead in their Europa League third qualifying round clash with Ruzemberok.

The Slovakian minnows hit the bar prior to Baines' 65th-minute intervention and almost grabbed an equaliser to take into next week's second leg when substitute Milos Lacny missed a glorious chance late on.

Rooney had a handful of chances to mark his second competitive debut for his boyhood club with a goal, but there was no mistaking the frustration of a side who started with £100million of new signings in their starting line-up.

"It's something I've been looking forward to for the last few weeks," Rooney said of his return to the Toffees.

"It's obviously great to be at Goodison wearing the blue shirt, it was a great feeling.

"But it was an important game for us so I had to put my emotions to one side. I've done that now and can get down to focusing more on the football."

On the match, 31-year-old Rooney added on ITV4: "It's very early on in the season... I know we can play better but it's important to win and get the clean sheet."

Third in last season's Fortuna Liga, Ruzemberok had been expected to roll over but instead their quest to puncture Everton's mood of pre-season optimism is alive and well for next week's trip to the Futbalovy Stadion.

There were no suggestions of the struggle to follow when Rooney and his fellow new boys were given a tumultuous welcome before kick-off, nor in the opening minutes in which the home side looked in cruise control. 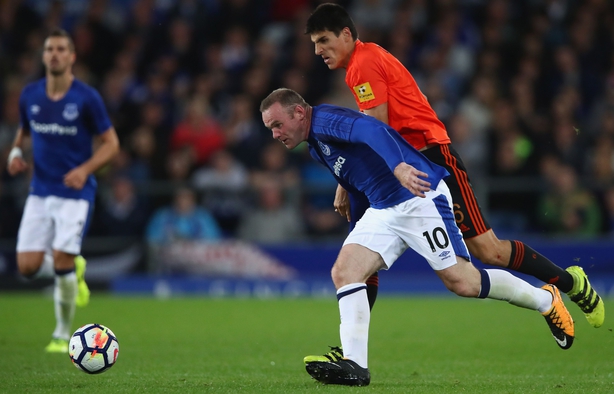 Ruzomberok captain Dominik Kruzliak almost screwed an attempted clearance over the head of his keeper Matus Macik in a comical third minute opening, and for the most part of the first quarter-hour the visitors were pinned back.

Rooney's tireless work off the ball almost paid off in the 20th minute when he drifted unchallenged across the box to pick up a neat through-ball by Baines, before turning to fire a rising left-foot shot over the bar.

Rooney and the impressive Davy Klaassen would also have chances but Ruzomberok served a warning when Dalibor Takac fired just wide on a rare counter-attack. 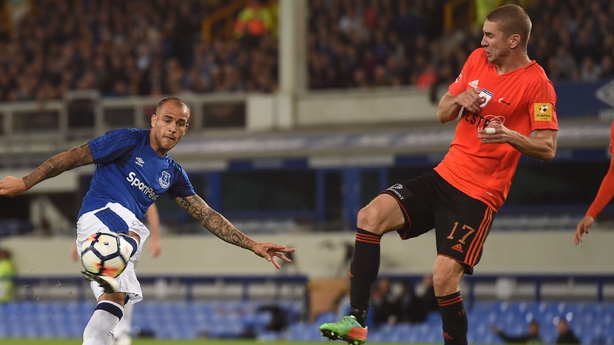 Two blunders by Ashley Williams almost gifted the Slovakians the lead, first a mis-placed pass which handed Erik Daniel a clear shot which was well saved by Maarten Stekelenburg, then a second mistake which served up a chance for Peter Maslo.

And Ruzomberok were not finished after the break, causing another major scare in the 56th minute when Stekelenburg had to tip a Maslo header against the bar from a Takac free-kick.

The introduction of Sandro on the hour helped swing things in Everton's direction and Baines finally lifted the frustration five minutes later when he drilled home a heavily deflected shot from the edge of the box after the visitors only half-cleared a corner.

Kevin Mirallas was only denied a second for Everton 10 minutes later by a brilliant fingertip save from Macik and Ruzemberok will still fancy their chances in the return leg next week.