The Hoops played without a recognised centre forward in the first leg of their third-round qualifier due to injury and suspension - midfielder Tom Rogic was ostensibly the furthest man forward - and struggled to create much against the Norwegian club in an encounter where Craig Gordon was the busier keeper.

The suspended Leigh Griffiths will be available for the return game at the Lerkendal Stadion in Trondheim next Wednesday night if he recovers from a calf injury but Moussa Dembele's recurring hamstring complaint could keep him out until September.

Asked about Griffiths' chances of making the return game, the Hoops boss said: "Hopeful. We will see where he is at the weekend.

"Even if he was available for this game he couldn't have played, with a calf strain.

"We we will see how he is over the next few days leading into next week.

"Nil-nil is never a bad result in Europe."

"Of course it is (a concern) if you haven't got strikers. But I can't worry about it so much. I want to focus on finding a way to get a result so I will look at it going forward.

"I thought Tom did very well. Of course he wasn't quite playing as a striker, we played him just off in a withdrawn role.

"I thought at times our general play was very good, it was just that bit round the edge of the box where, when you have natural strikers, they manipulate the ball to get a shot in and they are a reference to the team to bounce the ball off.

"So maybe we missed that link in the final sector."

Despite Celtic's frustrations in the final third, Rodgers was pleased with his side's efforts.

"Nil-nil is never a bad result in Europe," he added. "If you can't score it is important we don't concede.

"I was pleased with the players. We were up against it a wee bit without strikers. 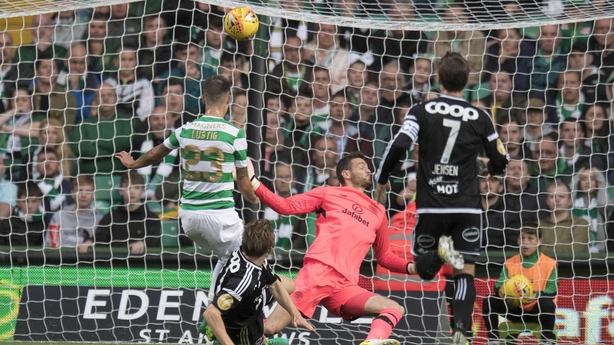 "They (Rosenborg) will want to come out a little bit more than they did, they will need to take the initiative.

"It is still evenly-balanced. If we go and play like we did at Monchengladbach and Manchester City last season then we are through. We will go there confident."

Kristoffer Ajer, the 19-year-old Norwegian who spent last season on loan at Kilmarnock, was handed a first start after defender Erik Sviatchenko pulled out with a groin issue which may keep him out of the second leg.

Rodgers said: "We will see. He (Erik) was training well until Monday and then had a groin issue and he had a scan which showed up something.

"It is difficult for a young player at 19 coming into the game here but he equipped himself well and he is only going to get better with more experience. He has the tools."

Rosenborg manager Kare Ingebrigtsen is confident that his side can finish the tie off in the second leg.

He said: "It is still a big task for us and it is an open game, small margins will decide who goes through, but leaving Glasgow, we are confident we can win the home game in Trondheim.

"I expect us to be more dangerous, we will approach it differently, now it is all about winning the game."