Linfield manager David Healy expressed his dismay at the "few idiots" who took the shine off his side's gutsy performance against Celtic in Belfast on Friday night.

The Northern Irish champions launched an investigation following the 2-0 Champions League qualifying defeat at Windsor Park after Hoops striker Leigh Griffiths was pelted with missiles, including a glass bottle, when trying to take a second-half corner. UEFA have subsequently instigated disciplinary action.

The Scotland striker, curiously booked for apparently taking his time at the corner, also faces disciplinary action after tying a Celtic scarf to a goalpost after the game, while the Parkhead club will be brought to book for picking up five cautions.

Around 1,000 Linfield supporters will make their way over to the east end of Glasgow for the second leg on Wednesday night and Healy is confident that this time the focus will remain on the football

The former Rangers striker, speaking before his side trained at Celtic Park, said: "The disappointing thing with everything that happened on Friday is that the players didn't get enough praise for their work ethic and the amount of effort they put into the game. It is frustrating.

"Someone asked me the question about the incidents straight from the game and I claimed that I didn't see the incident.

"But having seen and been made aware of the incident, I didn't want to come out and say anything but now that two or three days have passed, it's time for me.

"I know the club have made a statement about the idiots and it is hugely disappointing that with the amount of money that we spent and the efforts that the club make, we still have a few idiots who want to bring the club to the attention of other people. 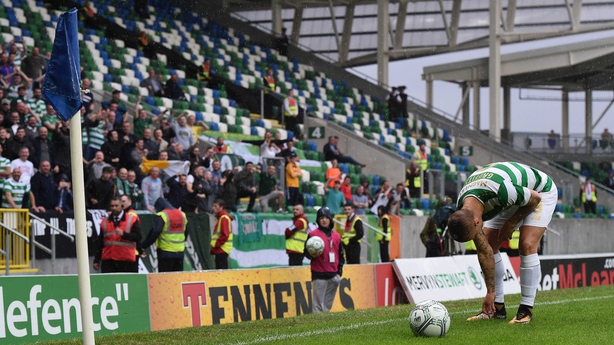 "It is hugely disappointing as the manager of the club that (because) of a few idiots, the players didn't come out with a lot more praise. A lot of people wanted to talk about what happened off the pitch.

"I did say about supporters throughout the world, sometimes no matter what you do as a club, you can't prevent a few idiots that follow the club. We have made giant strides to make sure we are talking about what happens on the pitch.

"It is hugely important tomorrow night that the 1,000 supporters or whatever who are going to be here behave themselves in an impeccable manner, enjoy the scenery, enjoy the game, enjoy the occasion, and we come away talking about hopefully another positive Linfield performance."

Healy concedes it will be the biggest game most of his part-time players have played in but is looking for another disciplined performance against the Scottish treble winners.

The former Northern Ireland forward said: "This will be the toughest game these lads will ever play in, the biggest game and hopefully it is the best game but we are certainly looking forward to it.

"We will set up the way we did on Friday, to contain them and force them wide. What we don't want to do is come here to be annihilated.

"A lot of the SPFL clubs have come to Celtic Park and been blown away.

"We don't want to be lambs to the slaughter. We will be positive when we have possession but will be organised and disciplined as we were on Friday night."