A textbook striker's display from Golgol Mebrahtu leaves Shamrock Rovers with an onerous task in the Czech Republic next week as they struggled to match a step up in standard in the UEFA Europa League at Tallaghat Stadium.

Mebrahtu, an Africa-born naturalised Australia, headed the opener before adding Mladá Boleslav’s second goal on the night with an instinctive close range finish.

In between, Graham Burke gave Rovers hope with a stunning strike before a third for the visitors from Jan Chramosta looked to have ended the tie.

Burke then struck again in stoppage time to give Rovers a late lift as they head to Eastern Europe.

Though the visitors showed an early swagger as they passed in well, it was Rovers’s skipper Ronan Finn, having surged past Petr Mareš, who had the first attempt on goal which he blazed high over the bar.

The Czechs weren’t impressing the Swedish referee who punished gamesmanship by dishing out two yellow cards inside the opening eight minutes, for a shirt tug and a dive.

But it was a free kick against them that had Rovers in difficulty five minutes later.

Skipper Ronan Finn was harshly adjudged to have fouled Jakub Rada. Mebrahtu got his free kick up and over the wall and sailing to the top corner before the perfectly positioned Simon Madden headed off the line.

Undaunted, and with Finn stringing them together in midfield, Rovers soon appeared to have got a grip on the game with Brandon Miele and Madden threatening.

Burke then threaded Gary Shaw in on goal on 23 minutes; the big striker’s composure letting him down as his rushed shot was wastefully straight at Jakub Diviš.

Though that spell offered promise for Rovers, the most incisive move of the first half undid them on 34 minutes as Mladá Boleslav took the lead.

Mareš was given time and space to link with skipper Marek Matejovský, who put Tomáš Prikryl away on the right.

Mebrahtu cleverly got in front of Dave Webster to meet the cross and glance his header to the net for a fine goal. 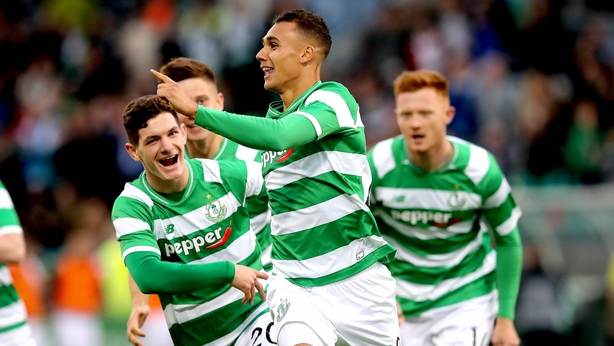 Heartened by aspects of their first half display, Rovers came out with added impetus for the second half and were level three minutes in from a majestic goal.

A throw-in from Madden dropped for Burke whose stunning first time volley from outside the box dipped past Diviš to the net.

Ryan Connolly cracked a well-struck drive at Diviš minutes later. But it proved a false dawn for Rovers as Mladá Boleslav punished negligent defending to restore their lead on 63 minutes.

Chramosta got to the end line on the left to cross where Mebrahtu again lost his marker to score with a tap-in.

Finn worked to lift his side’s morale with a skilful turn and shot Diviš pushed over the top while Luke Byrne got forward to further work the keeper.

But it looked over for Rovers on 88 minutes when Chramosta met Lukáš Pauschek’s cross to head past Tomer Chencinski.

Burke did have the final say two minutes into added time to give Rovers a glimmer of hope, crashing to the roof of the net following a scramble in the Czechs’ area.

Classy Bohemians see out the season with another win

Shamrock Rovers are league champions as Harps down Bohs