Russia received far more praise than complaints from FIFA and the teams that competed in the Confederations Cup ahead of the much more daunting task of hosting 32 teams at next year's World Cup.

The country exceeded low expectations for its hosting of the eight-team tournament that ended on Sunday, a World Cup dress rehearsal which passed off without any major incidents of fan violence or problems with infrastructure.

FIFA President Gianni Infantino hailed the four-venue tournament as a "great success" after shrugging off the logistical and security concerns that had cast a shadow over Russia's preparations.

"We have been hearing before this Confederations Cup about a lot of problems that we would experience here in Russia," Infantino told a news conference, listing fan indifference, stadium violence, racism and incomplete infrastructure among the potential issues.

"We have been hearing before this Confederations Cup about a lot of problems that we would experience here in Russia."

The Confederations Cup took place in four cities, Moscow, St Petersburg, Kazan and Sochi, all of which already have solid sports infrastructure and a history of hosting major international events.

The country now has to pull together eight additional World Cup venues in seven other cities, including some with limited experience of organising large-scale events.

Russia must also be ready to accommodate four times as many teams, as well as the large crowds that will flock to the country for the tournament.

Russian authorities have pledged to draw conclusions from the Confederations Cup but have yet to outline the areas that need improvement ahead of the World Cup.

"Everything will be exponentially more difficult (for the World Cup)," TASS news agency quoted Deputy Prime Minister Vitaly Mutko as saying on Monday.

"But if we transpose the level, the (organisation) standard of the Confederations Cup to the World Cup, then it will be a complete success." 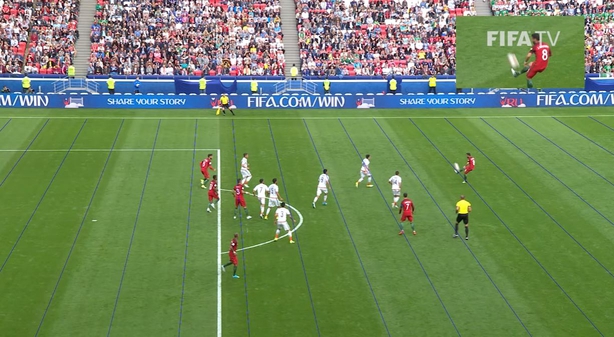 Foreign fans were generally upbeat about Russia's organisation of the tournament, praising the country for providing free train transportation between host cities.

"Everything was great around the stadium but it was more difficult to get around in the cities because few people speak English," Mexican fan Yajaira Lira, 33, told Reuters ahead of Mexico's third-place match against Portugal.

Most of the complaints about the organisation of the two-week tournament revolved around the traffic conditions and the state of the pitch in the new St Petersburg stadium, which had to be hurriedly re-laid after it was damaged during the 68,000-seater venue's inaugural match in April.

Mutko said authorities would work to ensure that grass at the St Petersburg pitch, which Portugal captain Cristiano Ronaldo complained was too long, would be able to sustain the stress of seven World Cup matches.

He told TASS that if the pitch's retractable technology would not work, the grass would have to be re-laid every three months.

Cameroon coach Hugo Broos complained that heavy traffic in Moscow, home to more than 12 million people and notorious for its gridlocks, caused his team to arrive an hour late for a training session. Broos reported similar issues in St Petersburg, Russia's second city.

The local organising committee did not respond to a request for comment on how it was addressing Cameroon's concerns.

Russia's efforts to curb fan violence at the Confederations Cup succeeded, but it will need to screen a far larger number of local and foreign fans as the World Cup nears.

All ticket holders at the Confederations Cup were required to obtain a personalised fan-ID, allowing authorities to screen them and keep hooligans away from the matches.

Several fans, including some with ties to hooligan movements, said organisers had granted them fan-IDs but revoked them as they made their way to matches, effectively banning them from attending.

"Because the Confederations Cup is a rehearsal for the World Cup, I think this type of fan selection will increase," Vyacheslav Shirinkin, a singer in a punk band that appeals to Russian hooligans whose fan-ID was cancelled, told Reuters last month.

"I think that apart from some guys with beer bellies, their wives and maybe some kids, other people will not be able to go to games."