Alexandre Lacazette is set to join Arsenal in the coming days for up to €50million, according to Lyon president Jean-Michel Aulas.

The France striker has been linked with a move to the Gunners for much of this summer as they seek to lift themselves into Premier League title contention.

The outspoken Aulas has previously insisted Lacazette is going nowhere this summer.

But, quoted in Le Progres on Sunday, he said: "The transfer of Alexandre Lacazette to Arsenal could be completed in a day or two.

"The €67million announced by sources in England is an unrealistic sum. Arsenal's first offer was €45million and the transfer will be done for a fee of between €45 and €50million.

"Being close to €50million is something unique and would undoubtedly be a record for Arsenal, and also for Lyon of course."

Lacazette scored 37 goals in all competitions for Lyon last season, including 28 in 30 Ligue 1 games. 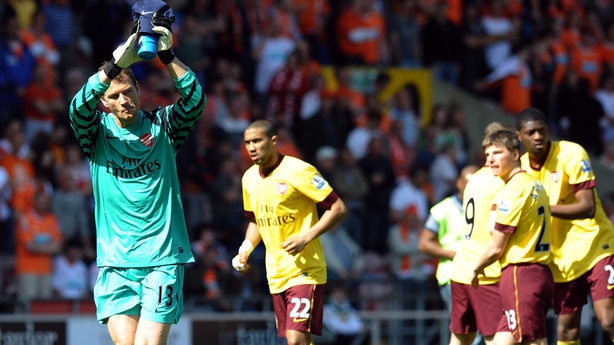 Former goalkeeper Jens Lehmann is to join the Gunners as a first-team coach.

It's understood the German will return to the club for a third time, following two stints as a player, as Arsene Wenger tinkers with his backroom staff.

Gerry Peyton is the Gunners' goalkeeping coach, with Lehmann to augment the coaching staff in a general role with the first team.

The 47-year-old Lehmann joined Arsenal from Borussia Dortmund in July 2003 and made 200 first-team appearances for the Gunners.

He was a member of the unbeaten 'Invincibles' team in the 2003-04 season, when Arsenal last won the Premier League title.

He left the Gunners at the end of the 2007-08 season, but returned for a three-month spell in March 2011 as injury cover for Wojciech Szczesny, Lukasz Fabianski and Vito Mannone - making one further appearance.