Celtic goalkeeper Craig Gordon has welcomed the addition of Republic of Ireland midfielder Jonny Hayes to the club's ranks.

Hayes completed a £1.3m switch from Aberdeen earlier this month, and the Dubliner's arrival is the Hoops' only signing of the summer so far.

The winger has proved himself a thorn in the side of the Glasgow giants on a number of occasions in recent seasons, most recently when he struck the opening goal in May's William Hill Scottish Cup final.

Gordon's team fought back to wrap up their clean sweep of domestic trophies but the Celtic number one is relieved his team will have one less thing to worry about the next time they face the Dons.

He said: "Jonny always seemed to do well when he played against us over the last couple of seasons.

"I'm glad he's on our team now rather than facing up to him."

"Everyone will always remember what we did last season, but it's up to us to go out and put a marker down for this season"

Gordon reckons Celtic need to forget about last season's 'Invincibles' campaign and focus on creating history all over again.

The Hoops racked up an incredible 47-game unbeaten run against Scottish opposition as they completed the domestic treble.

And the big question facing Brendan Rodgers' side as they prepare for the new term boils down to whether they can repeat that astonishing feat.

But Gordon reckons his side need to start this season with a fresh set of objectives as they chase a seventh straight Scottish league crown and a place in the Champions League.

Asked if his side could go another campaign without loss, the Parkhead goalkeeper told CelticTV: "That's in the history books now, we've achieved that.

"Now we've got to have the mindset of starting again. This is a new season.

"Everyone will always remember what we did last season, but it's up to us to go out and put a marker down for this season.

"We'll start off by doing that in the pre-season games then go and try to qualify for the Champions League." 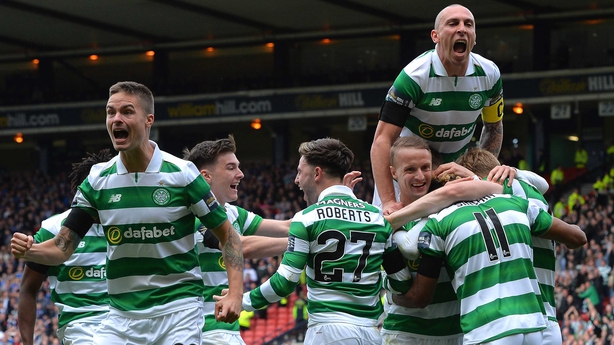 Rodgers' men will kick-off their quest for the group stages early next month, with Northern Irish champions Linfield or San Marino minnows La Fiorita providing the first qualifying hurdle to be cleared.

Celtic have already confirmed they will not take any fans with them to Belfast should Linfield progress to set up a powder-keg clash.

But Gordon insists, no matter who his team face, they will be leaving nothing to chance.

"I'm sure it will be a difficult game - they all are at this stage trying to qualify for the Champions League," he said.

"Whoever we get it's going to be a tricky tie and we need to make sure our preparations are right to ensure we're ready for it."