Germany eased into the Confederations Cup semi-finals with a 3-1 win over Cameroon on Sunday as the VAR system was again thrust into the spotlight when the on-field official needed two reviews of an incident to reach the right verdict.

But even then Roldan did not come up with the right outcome as he simply switched the colour of midfielder Siani's card from yellow to red.

It was only after Cameroon's players insisted he review the incident again that he realised his error, rescinded Siani's sending off and instead flashed the red card to the correct culprit Mabouka.

Germany deservedly topped Group B to set up a last four meeting with Mexico at the same venue on Thursday after the first international goals for Kerem Demirbay and Timo Werner, who got two. Vincent Aboubakar scored Cameroon's consolation.

The drama came on a landmark day for Joachim Loew, who was able to celebrate his 100th win as Germany's head coach in his 150th game in charge. 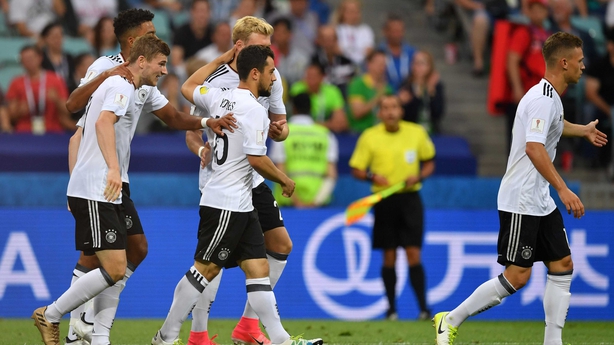 The best chance of a tight first-half fell to Germany's Joshua Kimmich as he headed wide from six yards with the goal gaping.

But three minutes into the second period, Germany hit the front as some wonderful build-up play was rewarded by a first international goal for Demirbay.

A superb back-heel from captain Julian Draxler steered the ball into the path of the former Turkey junior international and he rifled a shot into the roof of the net from the edge of the box.

After the lengthy stoppage involving the red card incident, Germany made their numerical advantage count almost immediately as Werner got his first national team goal with an excellent header from Kimmich's fine cross to the back post.

Cameroon were gifted a way back into the match when Marc-Andre ter Stegen let Aboubakar's header burst through his gloves in what was a poor goal to concede for the Barcelona keeper.

Any thoughts of a comeback from the 10 men, though, were quashed when Werner lashed home his second as Germany's young side went on to seal a comfortable win. 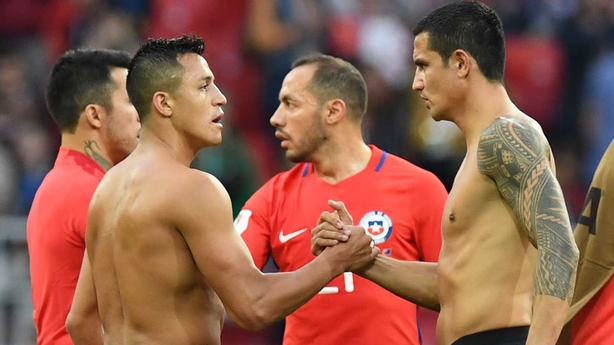 Chile reached the Confederations Cup semi-finals on Sunday with a 1-1 draw against Australia, who muscled the South Americans out of their stride but exited the tournament after wasting their chances.

Chile capitalised on a defensive mistake to equalise through substitute Martin Rodriguez in the 67th minute of the Group B game after Australia took the lead with a James Troisi goal in the 42nd.

Australia, needing a two-goal win to qualify, squandered an opportunity to go two ahead before halftime when Trent Sainsbury volleyed wildly over with the goal at his mercy.

The Australians, with forward Tim Cahill making his 100th appearance, missed further chances in the second half.

Chile, who face European champions Portugal in the last four on Wednesday in Kazan, came second in the group with five points, two behind Germany and three ahead of Australia in third.

Chile began in their usual fast and furious style and Arturo Vidal forced an early save from Maty Ryan with a superb volley. 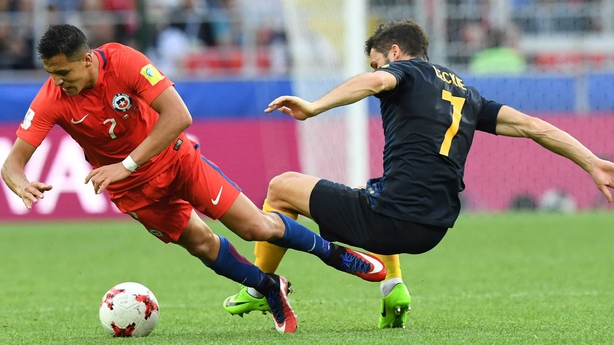 Alexis Sanchez then managed to get clear but the ball was taken off his foot by Ryan Milligan's last-ditch tackle. Sanchez went tumbling and Chile appealed for a penalty but the Video Assistant Referee ruled that it was a fair tackle.

After that Australia managed to outmuscle Chile, although they had four players booked before halftime and the 37-year-old Cahill was lucky not to be sent off for scything down Charles Aranguiz from behind.

Troisi dinked the ball over goalkeeper Claudio Bravo to give Australia the lead after Chile lost possession in midfield.

Still stunned by that, Chile's defence was then caught cold and the ball fell to an unmarked Salisbury but the central defender blasted his shot over when it looked easier to score.

Australia's Robbie Kruse had another chance after halftime when he got clear of his marker but failed to make contact with the ball.

They paid for those misses when Rodriguez turned the ball in from Eduardo Vargas' header after the Australia defender failed to clear an attack.

Ryan McGowan and Kruse had further chances for Australia which they again failed to take in a pulsating end-to-end match.