Shamrock Rovers remain in fourth position in the Premier Division with a comfortable 4-1 victory over Drogheda United at Tallaght Stadium on Friday night.

Sean Brennan briefly brought Drogheda back into the game as he finished from close range with 20 minutes remaining but Doona and Bolger struck late to seal a deserved victory for the hosts.

The Hoops could have led as early as the fifth minute when a superbly-weighted Ryan Connolly pass sent Gary Shaw through on goal.

The striker easily beat the visitors' attempt to play offside, but one-on-one with Stephen McGuinness he hesitated and took a touch too many, which allowed the keeper out to make the block.

Ryan Connolly showed his exquisite range of passing again to send Madden clear down the right and the full-back stood up an inviting cross that Ciaran McGuigan had to nod over his own crossbar as the teams went in level at the break.

Rovers however didn't have to wait long to take the lead once the teams returned to the field, however, just 19 seconds on the clock as Gary Shaw got his foot over the ball to volley past McGuinness.

Stephen Bradley introduced 17-year-old substitute Bolger for his first league appearance of the season on the hour mark and his first meaningful contribution was to lay on the second goal.

He played an exactly-weighted ball behind full-back Stephen Dunne for Clarke to run onto, and the winger made no mistake, squeezing the ball between the advancing McGuinness's legs.

Drogheda fought their way back in however and pulled one back with 20 minutes remaining as Ryan Masterson ran the ball out wide before crossing for Brennan to sidefoot home from close range.

Substitute Doona made the points safe 10 minutes from the end as he drilled the ball home from outside the box before Bolger capped off a fine cameo as he slid the ball home in injury time.

The hosts started brightly and Michael Duffy's second minute half volley was easily gathered by Ciaran Gallagher after some neat set-up play by David McMillan and Patrick McEleney on the edge of the Harps penalty area.

Harps grew into things as the half progressed and Dundalk were left frustrated in the final third. Their next opening didn't arrive until the 23rd minute when Duffy's teasing ball across the face of goal just evaded the incoming McMillan. Harps fed off the anxiety in the crowd and with 35 minutes played, they went close to pulling ahead. Gareth Harkin's ball down the left channel found Sean Houston in space but Gary Rogers got an important touch on his drive to take it wide for a corner.

From the subsequent delivery, Rogers was relieved to see a looping header bounce off the top of his crossbar with the Meathman surrounded by yellow shirts.

The breakthrough finally arrived in the 51st minute and it was a real moment of good fortune for Stephen Kenny's side.

Dane Massey let fly with a blistering half-volley with the outside of his boot that Gallagher did brilliantly to push away. Unfortunately for the Harps netminder, the ball cannoned off the face of Robbie Benson and flew into the net.

The visitors were left with a mountain to climb four minutes later when McMillan pounced on a loose ball to take the ball around Gallagher and steer home from a tight angle.

Dundalk turned it on after that with Duffy trying a spectacular effort on the right after Thomas Stewart did well to dig out a cross from the opposite side.

Sean Gannon then pulled an inviting ball back for the former Celtic winger but he couldn't keep his effort on target.

Harps struggled to keep pace and goal number three arrived in the 63rd minute, Patrick McEleney lifting another Goal of the Month contender past the helpless Gallagher before substitute Jamie McGrath put the icing on the cake with a tidy finish with 10 minutes to go.

Keith Ward and Dinny Corcoran scored early and late to punish dreadful Sligo Rovers defending and give Bohemians the points at Dalymount Park.

The win moves Bohemians up into the top half of the table as Sligo hover above the relegation zone without a win now in seven games.

Sligo started purposefully enough as Bohs struggled to get their passing game going but but it mattered not as the Gypsies’ availed of a right howler to take a ninth-minute lead.

Midfielder Ward was made to retake a free kick from distance after he played it short too quickly for Longford referee Ray Matthews.

At the second time of asking, Ward had a go, with his shot looking comfortable for Micheal Schlingermann to gather. But somehow the Sligo keeper fumbled the ball into the roof of his net.

A little more sure of themselves at the other end, Sligo carved out their best chance of the first half on 41 minutes, only to waste it.

A perfectly weighted diagonal ball in from the left by Regan Donelon was met by Raff Cretaro. But the veteran striker took it first time and fired his half-volley wide, kicking a post in frustration as he knew he should have equalised. 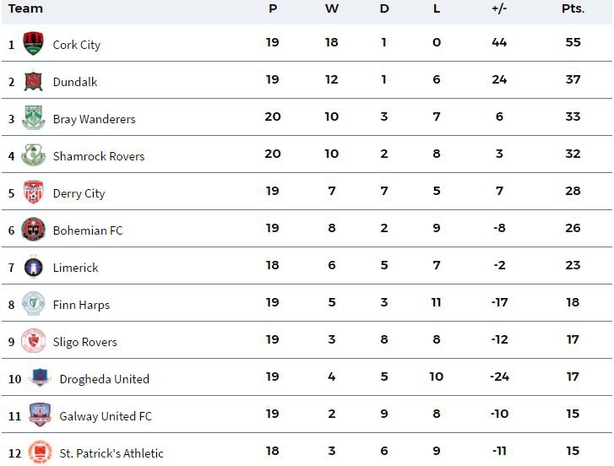 The visitors wasted another chance seven minutes into the second half when Jonah Ayunga worked a one-two with Cretaro only to drill wide from the edge of the area.

Ward soon sparked Bohemians back to life minutes later, shooting into the sidenetting after clever interlinked play with Dinny Corcoran and Paddy Kavanagh.

Bohemians defended well throughout, epitomised by a terrific series of blocks to deny Cretaro on 70 minutes. Home keeper Shane Supple produced the save of the game two minutes later, stretching to tip over substitute Liam Martin’s shot after a Cretaro effort deflected back to him.

Victory was sealed for Bohemians on 82 minutes, though, as Sligo were caught out at the back again. Pender’s long ball was missed by a defender to allow Corcoran a run in on goal and he made no mistake to slide home his 10th league goal of the season.

Galway United remain in the relegation zone while Bray Wanderers stay third and in the hunt for European qualification thanks to first-half goals from Anthony Flood and Mark Salmon – enough to outdo Stephen Folan’s second-half header.

Flood popped up in the 18th minute to capitalise on some poor United defending as he rose at the back-post unchallenged to direct a header from Gary McCabe’s cross from the left flank in past Winn, deflating the home fans.

The hosts were made to pay further in the 27th minute when Bray’s Salmon connected well with a Keith Buckley ball outside the box to double his side’s lead.

The best United could fashion in response was a Padraic Cunningham header that went straight at the ‘keeper from close range.

Galway toiled in the 78th minute and they finalyl found a foothold in the game as Stephen Folan powered home a header from a Ronan Murray corner to set up a tense closing few moments.

In the end, though, Keegan’s men could not find the vital second goal despite an injection of energy from three substitutes.