Cork City stretched their unbeaten run in the SSE Airtricity League to 18 games as they deservedly defeated Limerick 4-1 in the Munster Derby at Turners Cross on Friday night.

Stunning strikes from Stephen Dooley and Jimmy Keohane and a clinical brace from Sean Maguire was enough for City to maintain their 18 point lead at the top of the division at the expense of a Limerick side, who had levelled with a Rodrigo Tosi penalty.

City made just the one change to the side that comprehensively defeated Dundalk in their last league game with Garry Buckley replacing the injured Ryan Delaney.

And the league leaders had the first meaningful attempt on goal after six minutes but midfielder Conor McCormack’s fierce effort from the edge of the box curled just past the far top left corner.

Limerick were forced into making three changes to the side that beat Bray Wanderers a fortnight ago with goalkeeper Brendan Clarke deputising for Frederick Hall whilst Shane Duggan and Dean Clarke came in for the stricken Shaun Kelly and Thomas Robson.

The visitors almost snatched the lead after a quarter of an hour through Chiedozie Ogbene but the former City attacker’s low strike from a corner was blocked on the line by McCormack.

City continued to look the most dangerous side and midway through the half they finally made the break through thanks to Sean Maguire.

But Limerick responded almost immediately as they levelled the scores through Rodrigo Tosi. 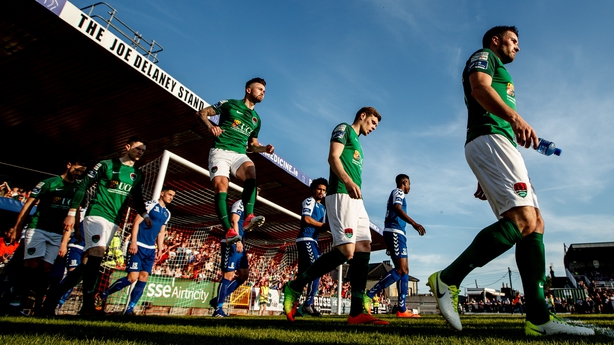 After Chiedozie Ogbene was tripped as he attempted to go around the on rushing Mark McNulty, the Brazilian forward stepped up and rifled the ball into the top right corner from the penalty spot.

Both meetings between the sides this season, in the league and in the EA Sports cup, yielded 3-0 wins for City, although Limerick emerged victorious the last time the sides met at Turners Cross.

This game also produced a third goal and it came on the stroke of half time thanks to a stunning strike from Stephen Dooley, who fired an unstoppable effort into the net off the inside of the far right post.

It took just 16 second half seconds for the League Leaders to double their lead and again it was Maguire who finished for his 18th league goal of the season.

Maguire was alert and intercepted Robbie Williams’s poor back pass before coolly rounding the goalkeeper and slotting into the empty net.

Jimmy Keohane added a fourth late on as he drilled a brilliant effort in off the far post.