Dundalk may have conceded defeat in the title race, but they remain firmly on course for a second-place finish following this derby rout against 10-man Drogheda at United Park.

Dundalk have dominated these fixtures in recent seasons and Stephen Kenny’s men were hot favourites to continue their supremacy on the Boyneside, but it was Drogheda who started on the front foot.

Ryan McEvoy shot over the bar from long range in the third minute, and the Lilywhites still hadn’t got out of second gear when Stephen Dunne fired over from a short corner instigated by Killian Brennan in the 13th minute. 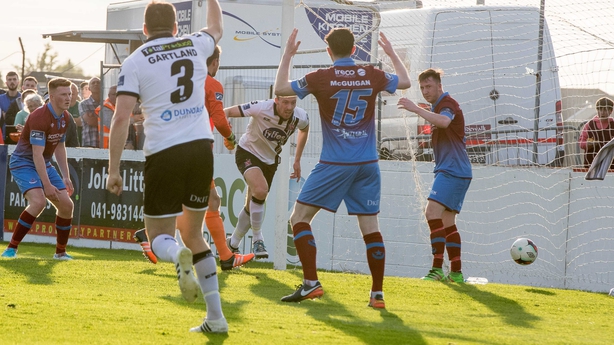 With half an hour gone there was no sign of the flurry of goals to come, but then Drogheda teenager Thomas Byrne launched into a late challenge on Patrick McEleney right in front of the Dundalk dugout and referee Derek Tomney pulled out the red card.

Opinions were divided on the merits of the decision, but there’s no doubt it changed the game and in an eight-minute spell coming up to half-time Dundalk helped themselves to three goals with their first three attempts of the match.

The first, on 36 minutes, came from a 25-yard shot by Stephen O’Donnell which keeper Stephen McGuinness parried into the path of David McMillan who tapped home from close range.

And it was McMillan again who bundled the ball home from almost on the goal-line to give Dundalk a two-goal cushion after Niclas Vemmelund dinked the ball into the six-yard area.

The Lilywhites effectively put the game to bed on 44 minutes when McEleney spotted McGuinness slightly off his line and chipped a superlative effort into the top corner.

On the restart Dundalk showed some early signs that they weren’t happy to settle for a three-goal margin. 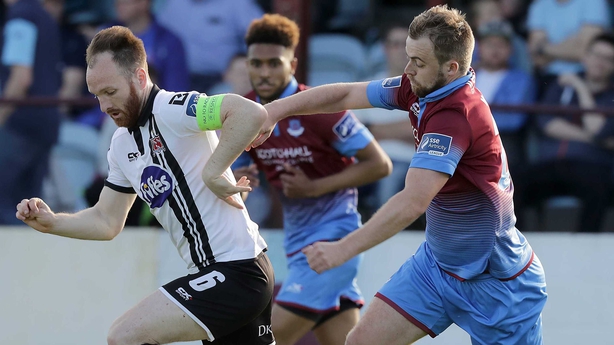 Michael Duffy and McMillan were both denied by McGuinness on 51 minutes, and Sean Gannon and Thomas Stewart then made a hash of what should have been a tap-in for one of them.

But just before the hour mark McGuinness was picking the ball out of the net for a fourth time when Stewart neatly teed up Duffy in the box and the former Celtic man lashed a shot beyond the Drogs keeper.

After that it was damage limitation for Drogheda as both sides emptied their benches, with the outcome long since decided.

It looked at one stage as if the Boynesiders might keep the scoreline reasonably respectable, but Ciaran Kilduff beat McGuinness at his near post for 5-0 on 83 minutes and almost immediately Kilduff was put through again to slot home for Dundalk’s sixth.