Tim Clancy was the hero for Bray Wanderers as his late goal secured the Seagulls a 3-2 win over Derry City at the Carlisle Grounds – just as it had the last time the sides met at Maginn Park in April.

Clancy struck nine minutes from time after the Candystripes had failed to deal with a Gary McCabe corner and the second-half substitute scrambled the ball home from close range to secure a result that sends Bray above Derry into third position.

Bray led led twice in the first half through Darragh Noone and Ryan Brennan and Derry twice pegged the Seagulls back with goals from Ronan Curtis and Nathan Boyle.

The Seagulls took the lead after six minutes following their first spell of pressure in the Derry City third.

McCabe's free kick into the box was headed back by Kevin Lynch and broke to Noone, whose shot was spilled by Ger Doherty and scrambled out for a corner.

Bray failed to heed the warning and Lynch was left with space on the left to cross low and, with nobody on either side prepared to attack the ball, it was deflected past Doherty off Noone's rear end.

The Seagulls continued to have the better of the play and could have doubled the lead when McCabe was played in by Flood but Bray's top scorer dithered and saw the angle for the shot narrowed by Doherty.

The visitors gradually got a foothold in the game and, after Dean Jarvis had somehow failed to head home from inside the six-yard box, they did level the scores through a well-worked goal from Curtis. 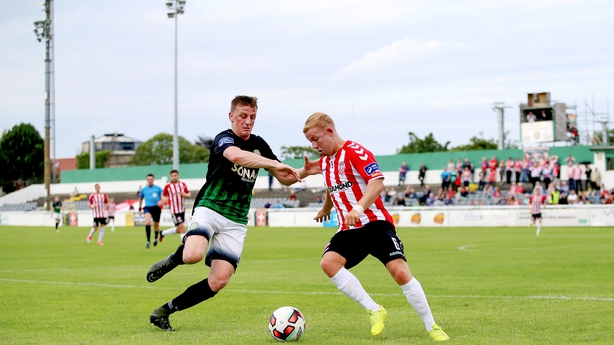 A beautifully-weighted pass from Low in midfield caught Bray right-back Hugh Douglas sleeping and Curtis strode inside before calmly side-footing a shot first time past the helpless Peter Cherrie.

Another defensive horror show would allow Bray to once again take the lead two minutes before the break.

Anto Flood had been causing the Derry backline untold trouble in the first half, and when he showed great skill to spin past two challenges, Harry Monaghan resorted to hacking him down.

The home fans were incensed by the referee's reluctance to produce a yellow card, but their ire was short-lived as McCabe crossed for Brennan to bury a free header from two yards.

Barely a minute after the restart, Derry levelled again as McEneff picked out Boyle on the edge of the box. The striker swivelled and shot in one movement and found the bottom corner of Cherrie's net.

Derry pressed harder for the winner in the closing stages but it was Harry Kenny's side who scored the knockout blow as Derry's achilles heel defending crosses was exposed yet again.

The visitors thought they'd equalised for a third time four minutes through McEneff but Cherrie pulled off an excellent full-stretch save to deny the midfielder and secure all three points.