Shay Given is not about to call a time on his illustrious playing career - even at the age of 41.

The 134-times-capped Republic of Ireland goalkeeper will become a free agent on 1 July when his contract at Stoke expires, but he is confident there is still another year left in him.

He told the Sunday Independent: "Yes I am 41, but I do feel I could go on for another year, be it as a number two or three in the Premier League, or number one in the Championship.

"There might be one last hurrah, a promotion, (it) just depends what is out there. I have no divine right to get a club but if someone came along and it was of interest, it might happen.

"I know the end is near. It could be this year, could be next year, but once you do retire, especially at my age, you can't go back in six months and say, 'I've changed my mind and I want to give it another go', and every ex-player I speak to says continue as long as you can. 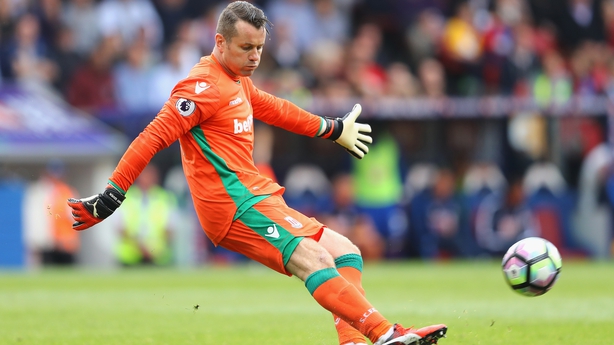 "There are a couple of options, which is encouraging. I know if the phone doesn't ring by the end of the window, then I won't be moping around because the party is over, but I do feel I could play another year, definitely."

Given has 636 club appearances to his name during a career which has taken him from Celtic to Blackburn, Newcastle - he represented the Magpies on 462 occasions - Manchester City and Aston Villa with loan spells at Swindon, Sunderland and Middlesbrough on his way to the Potteries.

In the circumstances, it is perhaps understandable that he does not want to hang up his gloves just yet, although he has been preparing for the future for some time and already has his UEFA A licence.

However, he knows wanting to move into coaching and finding the right opportunity to do so are not the same thing.

He said: "I think I could do the job. I have all the qualifications, but they could just sit in a drawer. There are not many English or Irish managers.

"It's not demoralising, but when you see clubs appointing foreign managers, like Norwich recently, it is a concern for English and Irish coaches.

"There seem to be fewer opportunities and even if you want to become an assistant or a goalkeeping coach, these guys are bringing their own people with them, so there are no jobs out there."