Richard Keogh has challenged the Republic of Ireland to end a good year on a high with a potentially campaign-defining World Cup qualifier victory over Austria.

Ireland face their Group D rivals in Dublin a week on Sunday knowing another win would, at worst, leave them still level with leaders Serbia on points with four games remaining and a trip to next summer's finals in Russia very much within their grasp.

That at the end of 12 months which also saw Martin O'Neill's men perform creditably at the Euro 2016 finals, where they eventually went out in the last 16 to hosts France, would represent a positive international season for Ireland.

Speaking after a new-look side had been comprehensively beaten by Mexico in a friendly in New Jersey during the early hours of Friday morning, Derby defender Keogh said: "Let's not take anything away from how we have played throughout the year with the Euros and the start to the World Cup campaign.

"We are gearing up towards the Austria game, that's the be all and end all."

"It's been a great year for Irish football and we want to continue that. We have got a great group of players, we have got some young boys coming through as well who made debuts tonight.

"We are gearing up towards the Austria game, that's the be all and end all."

O'Neill took only a handful of his senior men to America with those who play their club football in the Sky Bet Championship having finished their season on May 7. 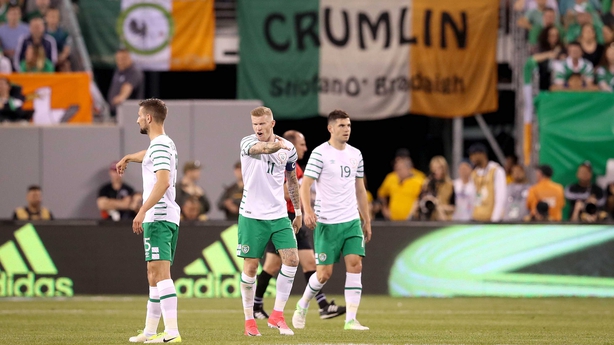 As a result, there was an inexperienced look about the team which took the field at the MetLife Stadium - midfielders Callum O'Dowda and Daryl Horgan made first starts for their country, while Kevin Long and Alan Browne were handed debuts as substitutes.

O'Neill also experimented with a three-man defence and saw Jesus Corona, Raul Jimenez and Carlos Vela hand the Mexicans a three-goal lead inside 54 minutes, with substitute Stephen Gleeson's late reply at least providing some cheer for the Republic.

However, Keogh is confident the lessons he and his team-mates will learn from a sobering experience will stand them in good stead, just as they did three years ago at the same venue when a Cristiano Ronaldo-inspired Portugal beat the Republic 5-1 in another friendly.

He said: "I remember when we played Portugal - I played in that game and it was another tough night, but you learn from it and you come out a better player, and I certainly have.