Arsenal ended a season of frustration and uncertainty with FA Cup glory, denying 10-man Chelsea the double as beleaguered Arsene Wenger became the most successful manager in the competition's history.

Having stumbled home fifth and missed out on Champions League qualification, criticism of the Gunners boss has reached unprecedented and unpalatable levels.

Wenger has continued undeterred and, ahead of talks about his future next week, oversaw a record seventh FA Cup triumph on Saturday, with Aaron Ramsey securing a memorable 2-1 win moments after Chelsea's Diego Costa had cancelled out Alexis Sanchez's controversial strike.

Victor Moses' sending off after taking a tumble added intrigue to a final that enthralled from the outset, when an offside call against Sanchez was rightly overruled - although his handball in the build-up was missed.

The first half could have been so much worse for unusually disjointed Chelsea, with Gary Cahill having to clear Mesut Ozil and Danny Welbeck efforts off the line, while the latter saw a header come back off the post and Ramsey directed the rebound on to the woodwork. 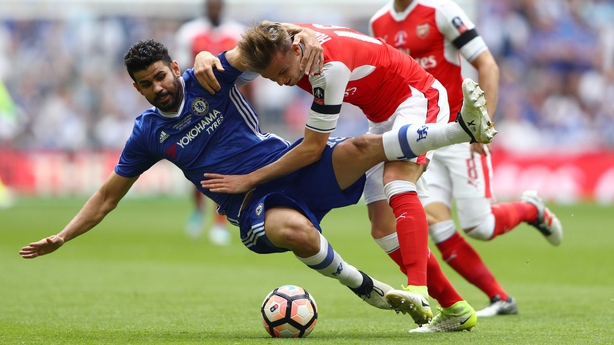 Desperation soon crept into Chelsea's improved second-half display and Moses took a tumble in the box searching for a penalty, only to be deservedly handed a second yellow card.

The Blues responded manfully as Costa somehow beat surprise selection David Ospina, yet Arsenal were not to be denied a 13th FA Cup.

Ramsey, the match-winner in 2014 against Hull, ran through to head home as Antonio Conte's men went close to a famous double, without a celebratory cigar.

Armed police patrolled Wembley and all in attendance underwent rigorous searches after 22 people were killed and many more injured in the attack at Manchester Arena.

Chelsea did not wear their black armbands in the first half after leaving them inside the jackets they decided against due to the warm weather - unusually sloppy from the west Londoners, much like their start.

Conte's men were second best in an opening period that was just four minutes old when Sanchez charged down a clearance. 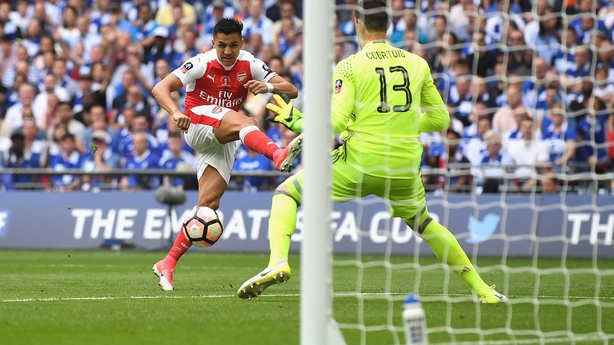 Assistant referee Gary Beswick quickly raised his flag for offside against Ramsey, but the midfielder left the ball for Sanchez to race through and smartly direct past Thibaut Courtois.

Confusion reigned for 40 seconds as referee Anthony Taylor went to speak to the linesman and awarding the goal - seemingly unaware of the Chilean's handball in the build-up.

The Premier League champions' unexpectedly poor half was followed by a predictably strong second-half response.

N'Golo Kante's deflected strike was followed by Mertesacker denying Costa and Moses forcing Ospina into a save as Chelsea turned the screw.

Pedro bent wide as from 20 yards but the blue charge soon began to slow, with Hector Bellerin seeing a drive saved before Moses went down in the box under pressure from Alex Oxlade-Chamberlain.

But, like so many times this season, Chelsea showed impressive resilience. Costa, their biggest threat, took a volleyed effort that took a slight deflection off Mertesacker, but should not have beaten Ospina so easily.

The blue hordes' wild celebrations were quickly halted, though.

Olivier Giroud, brought on just 38 seconds earlier, swung in a cross and Ramsey was allowed to burst through unmarked to power home a 79th-minute header.

Chelsea fans began to head for the exits when full-time was called on a memorable end to an otherwise forgettable Arsenal campaign.