Manchester United pulled together in their city's time of darkness, showing skill and spirit to overcome Ajax 2-0 and win the Europa League

Less than 48 hours after a terror attack killed 22 people and injured many more at Manchester Arena, the club's fans, players and staff stood unbowed in Stockholm.

United embraced the spirit shown in spades by the city they represent, with Jose Mourinho's men winning the Europa League as goals from Paul Pogba and Henrikh Mkhitaryan secured the victory.

United's first continental trophy in nine years brings with it the welcome boon of Champions League qualification after a disappointing Premier League campaign, but more crucially a cathartic, if temporary, release for some.

Nerves were settled at the Friends Arena when Pogba - playing in his second match since his father’s death - opened the scoring with a low shot that deflected in off Davinson Sanchez.

United's goal was just reward for a bright start that soon tapered off, only for Mourinho's men to return impressively from the break as Mkhitaryan directed home acrobatically.

Perhaps unsurprisingly, Ajax's callow side - the youngest ever in a major European final - were unable to find a way back as United added to this season's EFL Cup and Community Shield triumphs.

Europa League glory means United join Ajax, Bayern Munich and Juventus as the only clubs to have won all three major UEFA trophies, including the now defunct European Cup Winners' Cup, as well as the Club World Cup or the Intercontinental Cup.

Mourinho's men stepped away from the brouhaha that normally surrounds the build-up and wore black armbands in Stockholm, where a minute's silence quickly turned into applause.

Stockholm knows all too well the impact of such an attack as just last month five people were killed by a hijacked truck in the city centre, meaning security around the game had already been beefed up.

Armed police patrolled the perimeter of a ground that witnessed United's 64th match of a draining campaign, with the Europa League taking them more than 15,000 miles. 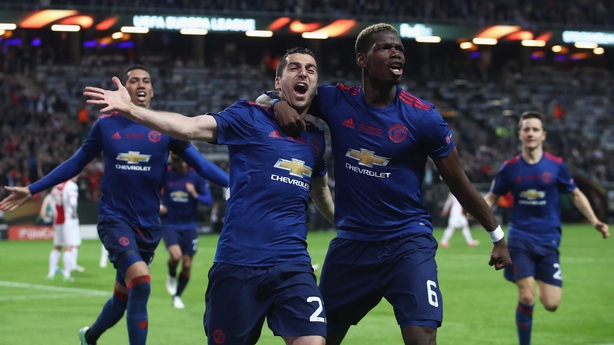 There were surprisingly few signs of lethargy early on, though.

Pogba's volley wide after 24 seconds was a shot across the bows for an Ajax defence dragged all over by Marcus Rashford.

Yet hope was soon dampened as within minutes Ajax's first major European final in 21 years became an uphill battle.

Neat play down the right ended with Pogba collecting the ball on the edge of the box. The Frenchman opened up his body and took a low 20-yard shot that deflected off Sanchez, wrong-footing goalkeeper Andre Onana and rippling the back of the net.

United's travelling hordes erupted as Pogba punched his chest, celebrating a goal that captain Antonio Valencia soon attempted to add to with a driving run and shot.

That was the last chance of note United would muster as Ajax began to settle, although dawdling Sanchez was fortunate not to be picked off by Rashford.

Daley Blind brought a timely end to a slaloming run by Traore as the Dutch side were afforded too much time in possession, but a lack of cutting edge meant they were unable to take advantage.

United re-grouped at the break and capitalised three minutes after the restart.

Chris Smalling rose to meet a corner from the right, heading on for Mkhitaryan to smartly lift into the roof of the net in front of United's raucous support.

Any building tension was released and Ajax struggled to respond to the second-half sucker punch, with Fellaini trying to compound matters with a header saved by Onana.

Tempers began to fray on the touchline after a late Mata challenge, while substitute Jesse Lingard was denied a late goal by Sanchez's recovery challenge.

Donny van de Beek was unable to truly test Romero as Ajax looked to claw back a consolation, but it was not to be for Amsterdam side.

Wayne Rooney came on for the dying embers and was handed the captain's armband by Valencia, celebrating wildly with his team-mates at the final whistle.