The 31-year-old midfielder was named on Friday as the Ladbrokes Premiership player of the year following a campaign of impressive performances, underpinned by his energetic display this week at Firhill.

The treble-chasing Hoops cruised to a 5-0 win against Partick Thistle on Thursday night to extend their unbeaten run since the start of the season to 45 games.

In added time, Brown, who has been at the Parkhead club for 10 years, found himself able to chase down Jags substitute keeper Mark Ridgers - something he put down to the demands set by Rodgers since the Northern Irishman came in last summer.

It shows that I still have that energy and desire to keep going for 90/95 minutes.

Ahead of the visit of Hearts on Sunday, where Brown will be presented with the league trophy, the Scotland captain said: "I spoke to the gaffer when he first came and he asked how long he thought I could keep playing. And I thought, 'great question', and I was thinking maybe two years at the highest level.

"Now I'm thinking I can go three, four years easily. As long as I'm playing, enjoying it and as fit as I am, I don't see why not.

"In the 91st minute at Partick I ended up on the left wing trying to close the goalie down. That has never been seen by me in the last five or six years.

"It shows that I still have that energy and desire to keep going for 90/95 minutes.

"We're a lot fitter than we have ever been. We are scoring more goals, creating more chances, and we look like a right good team.

"It's more intense training, short, sharp when it needs to be, but everyone's had to open up their lungs.

"It's been enjoyable this season but it's been really hard. It's been dedication from everyone as well." 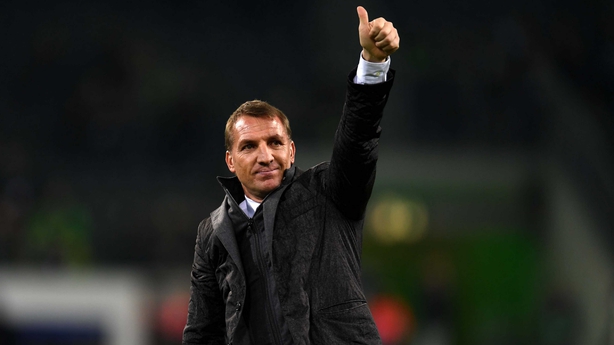 Rodgers, named Ladbrokes Premiership manager of the season, believes Brown can have the longevity of fellow Scots Gordon Strachan and Gary McAllister.

He said: "I said to him that if you look after your body then you can go on until you are 35, minimum, and maybe even as far as Gordon, who played until he was about 40.

"It wasn't by accident that guys like Gordon Strachan and Gary McAllister played for that length of time, because they looked after their body over many years.

"I didn't see him (Brown) before but I had plenty of people telling me what he was like last season and he was probably just unfortunate with injuries and whatnot.

"It's about fostering the mind-set in terms of being a top-level footballer, and in order for that you have to ensure everything about your life on and off the field is as perfect as it can be.

"So he readjusted his diet, took on board all the things we were looking to impose in here in terms of preparation, and that has then given him confidence.

"He naturally works hard anyway. He's a boy who will run all day for you. I look at his body and his physical shape, and he's in great condition."