Jose Mourinho is hopeful that David De Gea will remain at Manchester United next season, though reaffirmed that Sergio Romero will start next week's Europa League final.

Regular number one De Gea continues to be linked with Real Madrid, but Mourinho insisted he is keen to keep the Spaniard.

Asked when De Gea might be seen in a United shirt again, Mourinho said: "The first match against LA Galaxy in pre-season in Los Angeles.

"I hope to play Sergio in the final and hopefully we don't have problems with the keepers. David is top of the world and obviously we want to keep the top in the world." 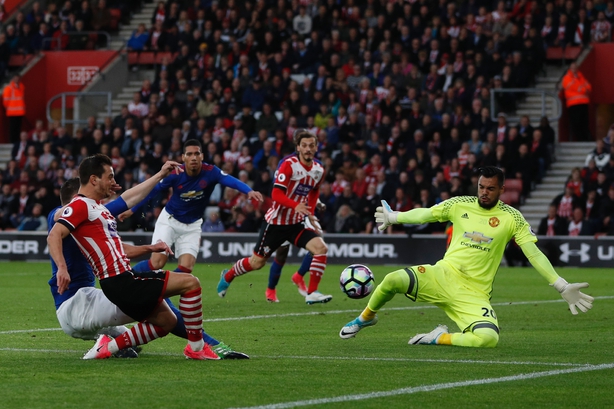 Romero insisted after his star turn that the Europa League final in Stockholm is the club's biggest match of the season as they look to book a Champions League spot for next term.

"A clean sheet is good for us - for defenders, for me and for the team," Romero said on Sky Sports 1.

"I think for us it (the final) is the most important of the year. For this club we need the trophy."

Southampton struggled to relieve the pressure building on manager Claude Puel against an under-strength United.

From Mourinho's perspective, some United players gave him food for thought ahead of the Ajax game.

"I think we played a good team, a good game, against a team that tried to win and tried to finish well and finish eighth. I think we did more than okay," Mourinho said.

"I think all of them gave me positive feelings. Sergio had a very good performance - more than very good.