Yann Kermorgant is one step closer to ending his career in the Premier League after firing Reading into the Championship play-off final.

The 35-year-old striker, who plans to retire at the end of next season, scored the goal which secured a 1-0 semi-final second-leg win over Fulham at a packed Madejski Stadium.

Kermorgant's nerveless penalty, at the start of the second half, means the Royals will face either Sheffield Wednesday or Huddersfield at Wembley on May 29 for a place in the top flight.

There was little to separate these two sides in the first leg, which finished 1-1 at Craven Cottage on Saturday, and ultimately it took a mistake to settle the tie.

Fuham defender Tomas Kalas was the fall guy as he stuck out an arm to control the ball, allowing Kermorgant to drill home from the spot.

The Frenchman looked like a man on a mission from the start, forcing a fine save from Marcus Bettinelli from the edge of the area in the opening moments.

But Fulham gradually grew into the game and full-back Ryan Fredericks was allowed to run unchallenged into the box and fire in a shot which Ali Al Habsi unconvincingly fumbled on to his near post.

After the break Kermorgant broke down the right and swung in an inviting cross towards the unmarked Lewis Grabban, but Bettinelli kept out his header.

The prospect of extra-time and penalties was beginning to loom, with many fearing a long night in store as Reading have missed six spot-kicks this season and Fulham an amazing nine.

As it was, a penalty did decide the outcome when, in the 49th minute, Kalas inexplicably handled the ball as he attempted to run it out of the penalty area and referee Martin Atkinson pointed to the spot.

Kermorgant stepped up and made no mistake, crashing home his 19th goal of the season underneath the diving Bettinelli.

They should have been two up when Chris Gunter overlapped and fizzed in a low cross but John Swift hit it straight at the Fulham keeper.

However, Reading were clinging on for the final 20 minutes, with Al Habsi pulling off a stunning save to tip Kevin McDonald's shot over the crossbar and ensure it will be Jaap Stam and the Royals running out at Wembley at the end of the month. 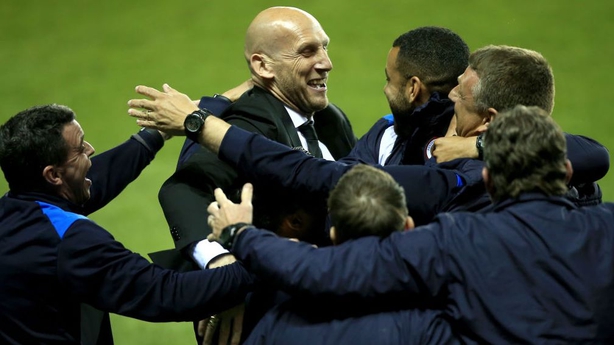 Reading boss Jaap Stam felt the moment was one of the best of his illustrious footballing career.

"It's one of the top ones," the former Manchester United defender said.

"It's great to come here to work at a club with a lot of potential - the players are prepared to work really hard.

On Al Habsi's display, he added: "Ali has been great throughout the whole season. The players are very happy with him because Ali is a keeper with great reflexes - a terrific game for him."

Fulham boss Slavisa Jokanovic was frustrated after watching his side dominate for long spells across both legs, but believes they can challenge for promotion next season.

"It's very disappointing this result," he said. "I feel proud of our progress.

"It's a great game, we try, we create many chances. They scored one goal, that's it - it's a strange situation.

"It's normal we're not happy - we cannot be satisfied. It's important to understand many important steps after last season.

"We know what we need for the summer and we want to be candidates for promotion next season."