Manchester City moved up to third in the Premier League with a comfortable 3-1 win over West Brom on an emotional night at the Etihad Stadium.

West Brom were outplayed but claimed a late consolation through substitute Hal Robson-Kanu.

The result tightened City's grip on a top-four position but Arsenal's victory over Sunderland meant their close battle with the Gunners and Liverpool for Champions League spots would go to the final day.

In such form, however, City should be confident of completing the job at Watford on Sunday.

There may have been tributes aplenty to Zabaleta, who announced at the weekend he would be leaving the club, and an eagerness to acknowledge other players, including Toure, who could also be leaving.

But in terms of business, City were ruthless without needing to hit top gear.

They bossed the game from start to finish with West Brom looking disinterested.

The Baggies, comfortable in eighth place, had won just one of their previous 10 games and it did seem their minds were already on the summer.

The only surprise was it took 13 minutes for City to register a serious effort on goal as Aleksandar Kolarov's free-kick was palmed away by Ben Foster.

After that the chances started to come with regularity as Kolarov had another effort diverted wide by Jesus, Leroy Sane drove across goal and Nicolas Otamendi shot at Foster.

The opener came after 27 minutes as Sergio Aguero brilliantly flicked a Toure pass into the path of De Bruyne, who teed up a simple finish for Jesus.

It was the Brazilian's sixth goal in seven starts for City and came from a position on the right of a formidable five-man attacking line.

De Bruyne doubled the lead with a composed strike from the edge of the box after Marc Wilson had intercepted a pass from Aguero, who tested Foster himself soon after.

Salomon Rondon mustered a rare shot for West Brom but City claimed a third after 57 minutes when Toure played a one-two with Aguero and charged into the box to shoot low past Foster. 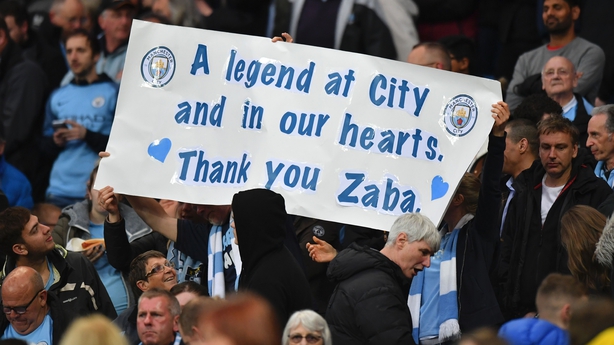 With his contract situation still uncertain, if the game does prove the Ivorian's final game at the ground it was a fitting way to bow out.

Such was City's confidence that Vincent Kompany, who for a worrying moment earlier took a blow to the calf and had to run off the knock, attempted an acrobatic volley that flew wide.

That delighted the crowd but it was nothing compared to the ovation Zabaleta received when he was brought on in place of David Silva just after the hour.

The Argentinian has been a hugely popular figure throughout his nine years at City, a period which has spanned the Sheikh Mansour era. Although he started on the bench, his name was chanted throughout and every touch after he came on was cheered, even when he miskicked to concede a throw-in.

Jesus forced Foster to save three times as City chased another goal but it was West Brom who had the final word when Robson-Kanu turned in from Allan Nyom's cross.