Reading's players have vowed to win promotion to the Premier League for suspended skipper Paul McShane.

The Republic of Ireland defender, who battled back from injury to line up in the play-off semi-final first leg against Fulham at Craven Cottage on Saturday, was shown a straight red card for a challenge on Kevin McDonald.

McShane will now miss Tuesday's second leg, finely poised at 1-1 after Tom Cairney's header for Fulham cancelled out Jordan Obita's opener, and the final should Reading get there.

But goalkeeper Ali Al Habsi is determined McShane's next match in a Reading shirt will be as a Premier League player.

Al Habsi said: "Everyone feels sorry for Macca that he won't be playing - but I feel sure we can win the match and get to Wembley and the Premier League for him.

"Macca has been fantastic since he came to Reading as skipper, he has the respect of the players and the fans.

"We are very disappointed what has happened to him, he worked so hard to recover from injury and get back in the team. 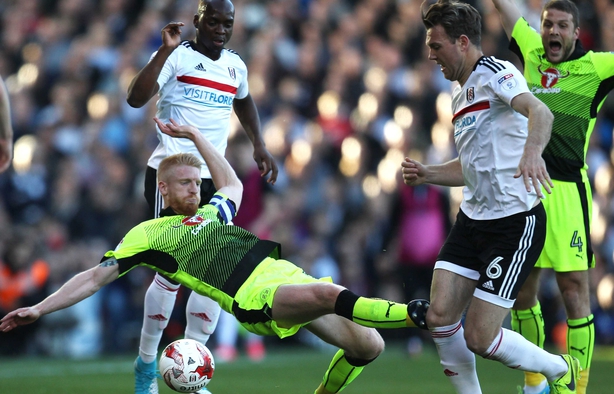 "It was a blow losing him and for the second leg, one of those things. We were so happy to see him back as skipper after his injuries, he is important for the team.

"We lost a key player in Macca, that can happen, but the squad has been fantastic all season and we will manage to play well without him.

"We had to play many games without him this season through injury but it is unfortunate as he played so well in the first 80 minutes on Saturday."

Reading boss Jaap Stam is waiting on the fitness of Obita for Tuesday's second leg after he twisted an ankle towards the end of Saturday's draw.

It also remains to be seen if Republic of Ireland U21 midfielder Liam Kelly has shaken off the illness that forced him to sit out the trip to Craven Cottage.