Naughton's piledriver in first-half injury time coupled with Fernando Llorente's early header eased the Welsh club to a 2-0 victory and four points clear of Hull with a better goal difference.

Paul Clement's men will stay up if the Tigers lose at Crystal Palace on Sunday.

They have taken 10 points from the last 12 available just when they needed it most, in stark contrast to the Black Cats, whose win at the KCOM Stadium last weekend proved to be yet another false dawn, and manager David Moyes was subjected to sustained calls for his head with owner Ellis Short watching from the stands. 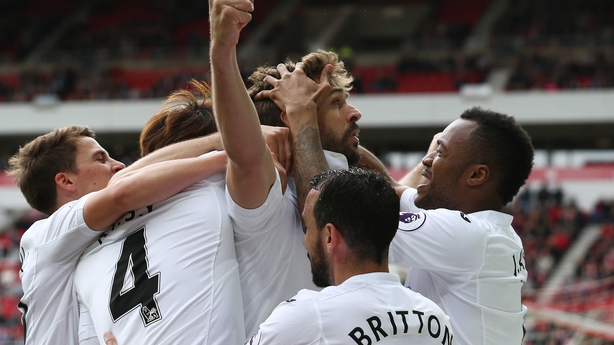 On a day when five-year-old Bradley Lowery and his fight against rare cancer neuroblastoma took centre-stage at the Stadium of Light, a banner reading 'There's only one Bradley Lowery' was unfurled in the South Stand as the clock ticked past the five-minute mark and a plane carrying the message 'United by cancer, divided by leagues' which had been arranged by some Newcastle fans - much to the distaste of many others - flew overhead.

On the pitch, it was Swansea, backed by a travelling support of around 3,000 whose tickets had been paid for by the players, who arrived with everything to play for and they had the game won by half-time.

The Black Cats could not even raise a whimper as they fell behind with just nine minute gone when goalkeeper Jordan Pickford uncharacteristically misjudged Gylfi Sigurdsson's free-kick and Llorente squeezed between John O'Shea and Jason Denayer to head home.

They succumbed once again deep into first-half stoppage time when, after Jordan Ayew had tormented the home defence on the left, Leon Britton and Ki Sung-yueng switched possession to the right for full-back Naughton to smash a rising right-foot shot across the helpless Pickford.

Bournemouth climbed into the top half of the table after Joshua King's late goal sealed a 2-1 victory against Burnley on Saturday.

On the sun-kissed south coast, Bournemouth opened the scoring when former Burnley winger Junior Stanislas brilliantly controlled a long ball with his chest before sliding a cute finish into the corner in the 25th minute.

Burnley, who have claimed just seven points away from home all season, equalised against the run of play through Sam Vokes' 83rd-minute header but, with a draw beckoning, King netted his 16th league goal of the season two minutes later to seal a deserved win.

Bournemouth - whose previous highest top-flight finish was 16th a year ago -- sit 10th with 45 points from 37 games. Burnley, meanwhile, are five points behind them in 14th.

Kevin Long started his second consecutive Premier League game for the Clarets. Last week against West Brom, he made his first start in the English top flight eight years after moving across the water from Cork City.

Southampton snapped a five-game winless streak after goals from Jay Rodriguez and substitute Nathan Redmond gave them a 2-1 win at relegated Middlesbrough.

Patrick Bamford scored a consolation goal for Boro, who had already lost any hope of avoiding the drop, after Republic of Ireland striker Shane Long missed a penalty for Southampton in an eventful second half.

Rodriguez fired the visitors ahead in the 42nd minute when he swept home a delightful Long cross from 12 metres and Redmond made it 2-0 in the 57th, curling a fine shot into the top left corner after rounding Boro defender Fabio.

Long shaved the bar with his spot-kick after he was hauled down by Boro keeper Brad Guzan before the hosts finally gave their suffering fans something to cheer as Bamford pulled one back with a thumping header from a corner.