Chelsea head coach Antonio Conte is focused on clinching the Premier League title at West Brom on Friday nightrather than persistent rumours linking him with the vacancy at Inter Milan.

Chelsea go to The Hawthorns (kick-off 8pm) seeking the win which would secure the Premier League title.

The Blues lead second-placed Tottenham by seven points and need three points from their three remaining games to be sure of silverware.

Rumours of a return to Italy with Inter have refused to go away in recent months and the sacking of Stefano Pioli has created an opening at the San Siro.

"I have two years (remaining under) contract with Chelsea," Conte said. "It's logical when you start the work in a new club the will is to continue to work, to try to improve your work in many years. For sure, this is my will.

"In this moment for me or for my players, the most important thing is to be focused on the moment.

"It's important now, don't lose the concentration, be focused.

"My players are totally focused on the moment. We mustn't forget that we must take three points to reach this target." 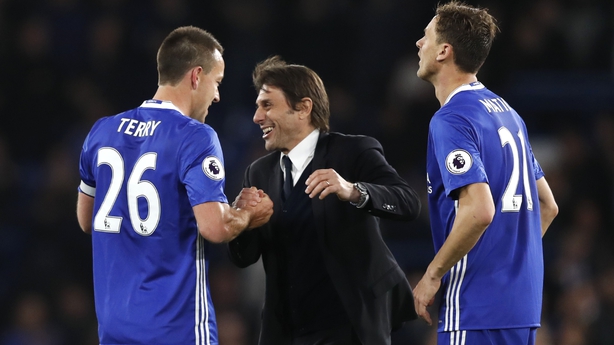 Conte's appointment on a three-year contract was announced in April 2016 and he assumed his post last July after leading Italy at Euro 2016.

The 47-year-old won three successive Serie A titles with Juventus prior to taking up his Italy role and has now rejuvenated Chelsea, who were champions under Jose Mourinho in 2015-16 before imploding and finishing 10th last term.

And he is seeking a fourth consecutive championship in domestic football, while a double could follow as Chelsea play Arsenal in the May 27 FA Cup final.

"I have to say thanks to my players because it's not easy to adapt to a new method, new philosophy and also to work very hard, to change totally your work, if you compare the work this season to the past.

"I think we're doing a really good job, but I want this job to become great and then fantastic. 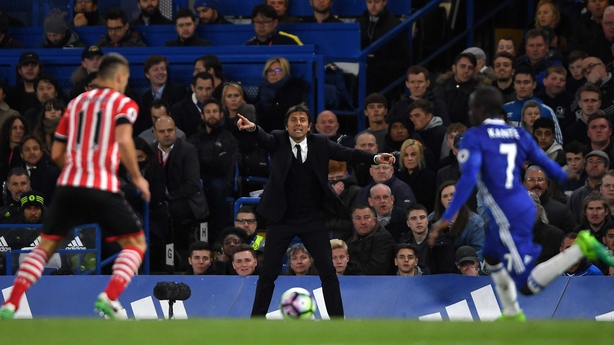 Conte could be offered a contract extension at the end of the season, something which is commonplace for title-winning managers.

Conte's wife Elisabetta and daughter Vittoria have stayed in Italy this season due to schooling, but have long been scheduled to move to London this summer.

The Blues boss has admitted the challenge of living apart from his family, who regularly join him in London, including last Friday.

Conte enjoyed a family meal instead of watching Tottenham's loss at West Ham which eased any title anxiety at Chelsea.

Conte added: "After the dinner the surprise was great - honestly."

"It's not important where you win, it's important to win"

Should the Baggies stall Chelsea's celebrations, it is likely only to delay the inevitable. Chelsea play mid-table Watford on Monday night and complete the season against relegated Sunderland on May 21.

Both games are at Stamford Bridge, but Conte prefers to secure the trophy at the earliest opportunity.

"It's not important where you win, it's important to win," he added. "Then you will have the time to celebrate the win where you want.

"Tomorrow's game is the most important game for us. It's a final.

"We must know that to play against West Brom is not easy. This is a really strong team, a physical team, a good coach. For sure, the atmosphere can be very hot.

"But it's important also in this moment to enjoy. I like to repeat: this is a good season. We want to become a great season. There is only one way, to take three points and to win the title."