Sulley Muntari says he was "treated like a criminal" by the Italian football authorities after he was banned for complaining about racist abuse last weekend.

The Pescara midfielder, who played for Portsmouth in the 2007-08 season, was booked during last weekend's match against Cagliari after he reported the abuse to the referee. He was sent off after walking off the pitch in protest at the yellow card.

The suspension was overturned on Friday by the Italian football federation (FIGC) and the Ghanaian has now spoken out over the incident.

"I feel that someone has finally listened and heard me," Muntari said in a statement released by FIFPro, the world players' union.

"The last few days have been very hard for me. I have felt angry and isolated.

"I was being treated like a criminal. How could I be punished when I was the victim of racism?

"I hope my case can help so that other footballers do not suffer like me.

"I hope it can be a turning point in Italy and show the world what it means to stand up for your rights.

"This is an important victory to send a message that there's no place for racism in football, or society in general." 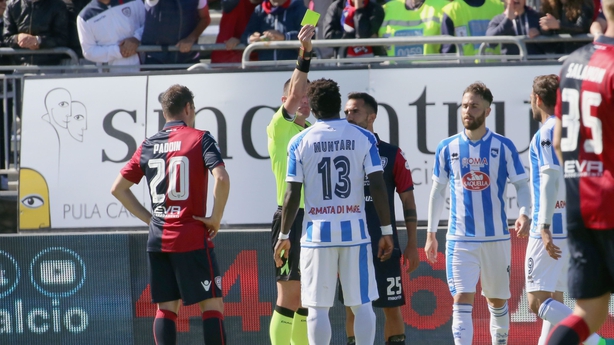 The rescinding of the ban means Muntari can play for Pescara against Crotone this weekend.

"Anyone with a sense of justice will look at the situation and see the right thing has been done," Barnes said.

"For the lad to have been racially abused is bad enough but to receive a ban as well because the correct protocol had not been carried out was very unfair, to say the least.

"There is clear protocol in place that should be triggered when this type of abuse happens and that did not happen.

"The player was forced to take action under his own volition because there was no support and the decision for him to be banned was clearly the wrong one.

"So, albeit belatedly, the authorities in Italy have now made the correct decision."