Manchester City tightened their grip on a top-four spot with a convincing 5-0 win over Crystal Palace in the Premier League.

The outstanding David Silva, who passed a fitness test to feature, set City on their way to three crucial points in the Champions League qualification race by scoring after just two minutes.

Captain Vincent Kompany doubled dominant City's lead at the Etihad Stadium before Kevin De Bruyne, who also hit the woodwork and set up two goals, and Raheem Sterling got on the scoresheet and Nicolas Otamendi headed a late fifth.

The victory lifted City above Liverpool into third in the table on goal difference while Palace, despite looking likely to survive, still have work to do to make their top-flight place certain after being outplayed. 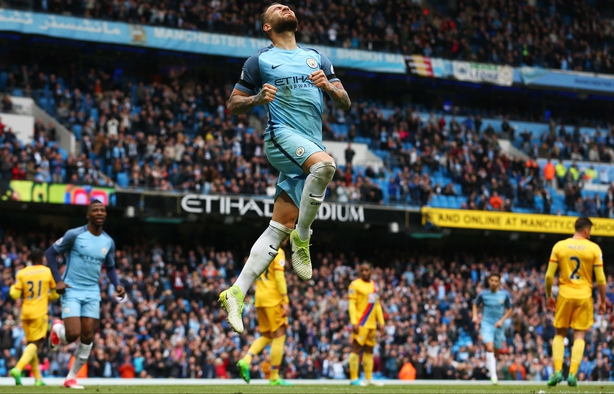 This was about as comfortable as it has been for City since Pep Guardiola took charge last summer. They controlled possession while Palace, despite initially looking well-drilled defensively, offered little.

Silva only returned to training on Thursday after missing two games since being forced off in the FA Cup semi-final loss to Arsenal with a hamstring injury.

But the Spaniard showed no signs of rustiness and was at his majestic best from the outset, starting and finishing the move that created the opening goal.

Silva floated a delicate ball into the box for Sterling and the England forward pulled back into the danger area. Martin Kelly attempted to head clear but succeeded only in finding Silva and he calmly tucked home his 50th City goal.

It was a wonder City did not increase their lead in the opening half-hour. Gabriel Jesus, alone up front in the absence of top scorer Sergio Aguero, excited the crowd as he got the chance to run at goal but Luka Milivojevic made a well-timed challenge.

Silva forced Wayne Hennessey to save before setting up another chance for Jesus, who failed to make a clean connection. 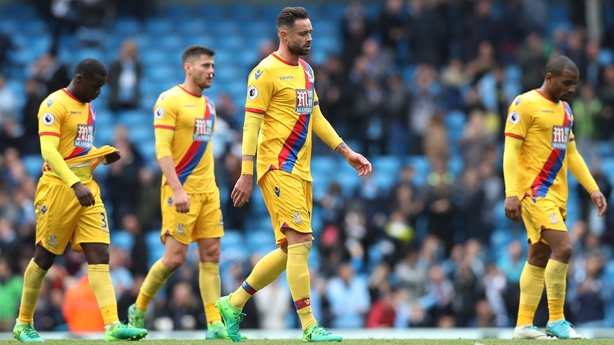 After 35 minutes with little possession, Palace almost equalised out of the blue when Christian Benteke rose for an Andros Townsend cross but Willy Caballero brilliantly palmed away his header.

That gave Palace some encouragement and Van Aanholt fired wide as they finished the first half well, but their hopes of a leveller were dashed within minutes of the restart.

Kompany doubled City's lead with a with a thumping 49th-minute strike into the roof of the net having gone forward for a corner.

The hosts then started to turn up the heat. De Bruyne hit the bar from a free-kick before adding the third just before the hour with a low strike which Hennessey got a hand to but could not keep out.

Sterling added another eight minutes from time with a well-taken left-foot strike from a De Bruyne nod-down, and Otamendi completed the scoring with an injury-time header from the Belgium playmaker's free-kick.