Celtic dished out one last humiliation to hapless Rangers as their 5-1 win at Ibrox took them to within five games of an unbeaten Scottish domestic campaign.

The Parkhead faithful lapped up every moment of this season's sixth and final Old Firm duel as Brendan Rodgers' undefeated troops outclassed a feeble Rangers line-up from start to finish.

Early goals from Scott Sinclair and Leigh Griffiths robbed the hosts of any belief they had left before Callum McGregor, Dedryck Boyata and Mikael Lustig's second-half strikes handed Celtic their biggest ever Ibrox win. Kenny Miller's late reply was no consolation.

While Rangers' hopes of finishing second are all but gone, their old rivals now need only negotiate their final four league games and the William Hill Scottish Cup final against Aberdeen to complete a loss-free league season and historic treble.

Despite boss Pedro Caixinha adding the attacking intent of Josh Windass and Joe Dodoo and the defensive experience of veteran Clint Hill to his team, there was no real resistance.

Such were the confidence levels among the away supporters, they even cheered as the home team was read out.

Rangers needed to avoid going behind early - but they lasted just seven minutes before conceding.

Myles Beerman was again starting at left-back for Caixinha's team but the 18-year-old's inexperience showed as he needlessly dived on Patrick Roberts inside the box.

Frustrations were already boiling over in the stands and they erupted in appalling fashion as the champions wheeled away to celebrate, with a Rangers fan leaping from the Govan Stand to confront Celtic skipper Scott Brown.

Beaton and James Tavernier had to restrain the intruder before he was removed by police. 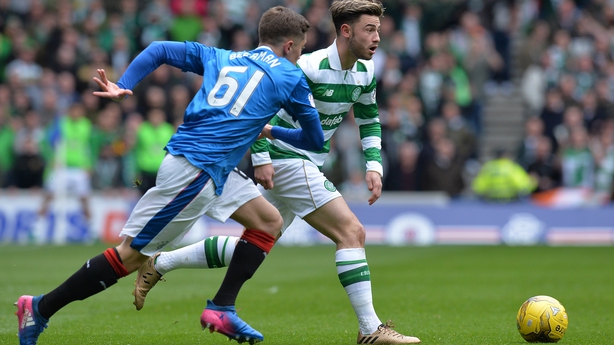 Brown was almost in trouble himself after catching Miller with an elbow, but he got away with a talking-to.
However, things would only get worse for Rangers as they found it impossible to stop their rivals flooding forward. While the hosts' passing was erratic, Celtic's exchanges seemed laser-guided.

And they struck again after 18 minutes. Stuart Armstrong robbed Emerson Hyndman in midfield before spraying the ball forward to Griffiths, with the striker - only starting because of Moussa Dembele's hamstring injury - ripping a sensational drive past Foderingham.

Rangers were left stunned when Beaton refused to give a foul after Jozo Simunovic careered into Miller, but Celtic did not hang about and only the crossbar denied Griffiths again. Sinclair put the rebound wide then missed an easier chance at the back post on the half-hour mark.

That Rangers reached the interval just two goals down seemed a minor miracle. Their only two attempts in goal during the entire half from Windass and Miller both failed to test Craig Gordon.

Caixinha looked to stiffen up his midfield by swapping the anonymous Dodoo for Andy Halliday.
But the tide continued to flow in one direction only and it took Celtic just six minutes from the restart to stretch their advantage.

Rangers surrendered possession again and McGregor made them pay as he netted by drilling the ball through Tavernier's legs and into the net from 12 yards out.

But when Boyata was allowed to jump unchecked from a Griffiths free-kick on 66 minutes, that was the cue for the Rangers faithful to head for the exits.

Miller did beat Gordon with 10 minutes left after swapping passes with Joe Garner, but even then Celtic did not relent and Lustig wrapped up Celtic's second five-goal derby display of the season when he ghosted through a non-existent Rangers defence to slot home at the death.