Arsenal boss Arsene Wenger has reiterated that rivals Tottenham face a "very difficult" transition when they move into their new stadium.

Wenger takes his side to White Hart Lane for what could be the last time on Sunday, with Spurs set to move to Wembley for a season before taking residence of their new home.

The Gunners underwent the same process when they relocated from Highbury to the Emirates Stadium in 2006, with a period of financial restraint and readjustment following.

Since the move, Arsenal have not been able to recapture the Premier League title they last lifted in 2004 and Wenger also had to sell a plethora of talent to help balance the books.

Now, ahead of his 50th - and potentially last - north London derby - he has again warned his fierce rivals it can take a long time to feel at home in a new ground.

Asked how difficult the new stadium could prove for Spurs, Wenger replied: "Very difficult, much more you can imagine.

"First of all, you face financial restrictions, which we did. Overall, it might be less in future because you have more income.

Secondly because you don't feel at home like you were before. And you need to recreate a kind of history to feel comfortable and to feel like you play at home. I would say it can take two years (to feel at home)." 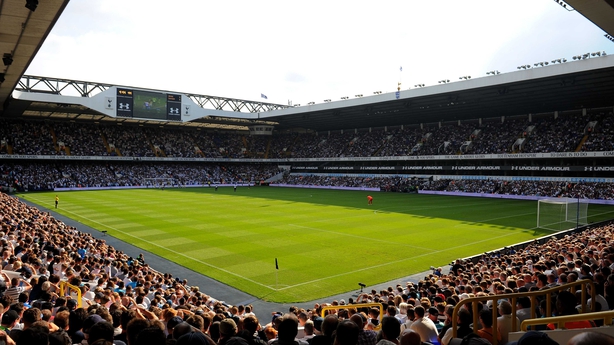 Victory for Tottenham on Sunday would mean they are guaranteed to finish above their neighbours for the first time since 1995.

Arsenal fans have become so accustomed to being the top dogs in north London they have christened the day when Spurs cannot mathematically finish above them in the table as 'St Totteringham's Day'.

Wenger has never finished below Tottenham and admits White Hart Lane has been the scene of some of the highs during his two-decade spell in charge of Arsenal.

"When you finish 20 years above them, it's not important and now suddenly it becomes important," he said.

Asked about his best memory at Spurs, he said: "Maybe when we won the title there, but it was good and bad that season because they equalised in the last minute and we nearly had a fight in the dressing room between Sol Campbell and Jens Lehmann, because Jens gave the penalty (away)."

While Arsenal battle to finish in the top four, Spurs will be looking to beat their rivals to keep their title ambitions alive.

But Wenger insists wrecking the championship hopes of Mauricio Pochettino and his players is not on his agenda.

"At the moment, I'm not in that kind of mode of thinking, what is important for us is to win our games," he added.

"Basically, if it's not Tottenham it's somebody else. We know we are in the position where we have to win our next game.