A dramatic last-minute equaliser from Rodrigo Tosi in earned Limerick the point they needed to stay fourth in the Premier Division at Tallaght Stadium.

Centre-half Roberto Lopes scored the opening goal, his first since joining from rivals Bohemians in the off-season, glancing in a header from Graham Burke's corner midway through the first half.

Brazilian striker Tosi had a number of chance to level after the break but he saved his best for last as he converted in the dying moments following a superb run and cross from Chiedozie Ogbene.

A suspension for Rovers' Trevor Clarke meant a first league start in over 12 months for Luke Byrne – the left back tore his cruciate ligaments against Cork City at Turner's Cross a year ago this week.

Limerick's interim boss Willie Boland made one change from the side that drew away to Derry on Tuesday with former Hoop Dean Clarke replacing Chris Mulhall on the right flank.

After trading six goals with Bray Wanderers last week, it was little surprise to see Stephen Bradley's Rovers take the game to their opponents in the early stages.

The home side went close within two minutes as Gary Shaw did brilliantly down the right to beat Sunderland loanee Tommy Robson and cut back for Burke, whose shot was well-blocked by Limerick captain Robbie Williams.

Shaun Kelly had Rovers keeper Tomer Chencinski scrambling after ten minutes when his right-wing cross began to dip into the top corner and the Canadian clawed the ball out for a corner.

Rovers began to take control from there, however, and an intricate one-touch exchange between Burke and Shaw saw the former Aston Villa striker pull his first-time shot inches wide.

With 18 minutes played, Burke was the architect of the opening goal as he laid on a corner for Lopes, who timed his run beautifully before heading past a helpless Brendan Clarke.

Rovers should have doubled their lead five minutes later as captain Ronan Finn found space on the right-hand side of the box and teed up Shaw, but somehow from five yards he sidefooted the ball past the far post.

On the stroke of half time, good interplay between Lee-J Lynch and Bastien Hery saw an opportunity open up for the French midfielder, but his shot was comfortably saved by Chencinski.

An exciting first half gave way to a tepid second, and it took almost 20 minutes for the first real chance of note as Lynch launched a deep cross towards the Brazilian frontman.

The final touch goalward was off the defending Lopes, however, and it took a smart save low to his right from Chencinski to keep Rovers' lead intact.

A teasing cross from Dean Clarke nearly provided Tosi with a chance to level things up ten minutes from time, but the striker was flat-footed and the ball bounced harmlessly wide.

A mistake from Lopes from sub John O'Flynn's knock-down four minutes from time presented Toi with a chance but the goalscorer recovered to make a brave block from close-range.

Tosi would make no mistake as the clock turned to 90 as he stretched to turn Ogbene's cross in to the roof of the net. 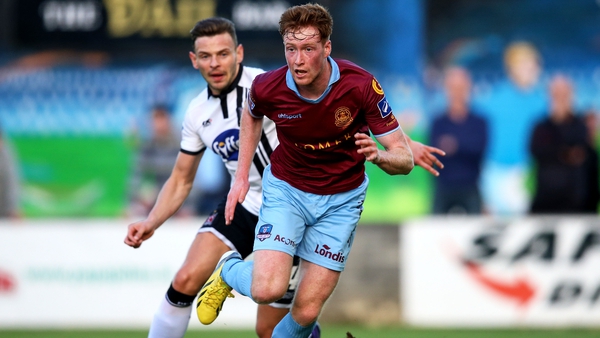