Nemanja Matic's thunderbolt sent Chelsea into the FA Cup final in style, condemning Tottenham to yet more Wembley woe and giving Mauricio Pochettino's men a bloody nose ahead of the title run-in.

England's best sides took a break from their increasingly exciting duel for the Premier League crown, instead renewing hostilities in a Wembley battle that lived up to the hype.

Tottenham twice clawed their way back in this thrilling semi-final, only for Antonio Conte's table toppers to run out 4-2 victors as Matic's remarkable drive complemented game-changing substitute Eden Hazard's strike.
Whatever the pre-match posturing, ending Spurs' eight-match winning run in all competitions will give the Blues a psychological boost with six league games remaining.

Chelsea, four points clear of Tottenham, were ahead inside five minutes as Willian's free-kick flew home, scoring again from the spot after Harry Kane's flicked header had drawn Pochettino's side level.

Hazard, surprisingly left out of the starting line-up, set the Blues on course for the final with a low drive followed up in style as Matic's rifled effort flew in off the underside of the bar.

Before the highly charged encounter got under way, rivalries were put aside as supporters paid tribute to Ugo Ehiogu.

'Ugo' was chanted by fans throughout Wembley during a minute's applause, with players wearing black armbands in memory of the popular former defender who died aged 44 on Friday.

The death of Tottenham's under-23 coach sent shockwaves around the footballing world and Pochettino said before the match "we need to adapt in our life to live with that pain in our heart".

It was tragic preparation for a match that Spurs started unusually sloppily.

Toby Alderweireld hacked down Pedro as the Chelsea attacking midfielder bore down on goal, with Chelsea fans' fury at the normally unflustered defender only getting a booking audible but short-lived.

David Luiz and Willian stood over the resulting free-kick, with the latter taking aim from 20 yards and beating off-balance Hugo Lloris to send the blue hordes wild.

The fifth-minute opener did not immediately jolt Tottenham into life and Michy Batshuayi tested Lloris with a header.

Spurs looked a shell of the side that have been so impressive recently, yet managed to level on their first serious voyage forwards.

Eriksen's low cross was met at the near post by a smart run by Kane, sending an unorthodox flicked header past the returning Thibaut Courtois.

The 18th-minute equaliser gave Tottenham a new lease of life, only interrupted by treatment for David Luiz after Alli inadvertently trod on the Chelsea defender. 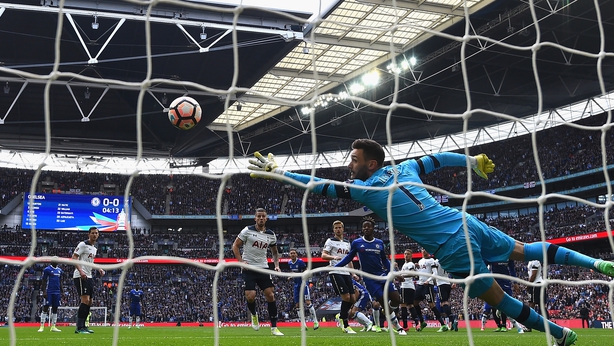 Tottenham were pushing strongest for a half-time lead, only to be caught by an avoidable sucker punch.
Victor Moses tumbled in the box after Son Heung-min foolishly went to deck and referee Martin Atkinson pointed to the spot after consulting with the linesman.

Batshuayi's desire to take the penalty was overruled as captain Cesar Azpilicueta gave the ball to Willian, who added his second of the afternoon by sending Lloris the wrong way.

Chelsea appeals that the Tottenham goalkeeper handled outside the box were ignored as half-time approached - and seven minutes after the restart Spurs again drew level.

Eriksen swung in an outstanding ball into the box, with Alli bursting between defenders to direct home in front of Tottenham's fans.

With Chelsea under the cosh, Diego Costa and Hazard, surprisingly left out of Chelsea's starting line-up, were brought on.

Play was now slower and far more edgy and the ever-impressive Hazard punctured Spurs' hopes in the 75th minute.

The Belgian broke Tottenham's hearts last season with the goal that handed Leicester the title and fired a low strike through a crowd from the edge of the box.

Hazard was not done there, though, providing the late strike that wrapped things up.

Matic, without a goal this season, wound back his left leg and unleashed an outstanding strike from nigh on 30 yards that flew in off the underside of the bar.

Marcos Alonso and Costa looked to compound matters as Spurs fans streamed out, with Kane close to a stoppage-time consolation after his free-kick squirmed through Courtois' grasp.