Gary McCabe tormented his former club to score twice - and make it a remarkable 11 goals for the season - as Bray Wanderers maintained their fine start to the season with an impressive win over Shamrock Rovers.

Further strikes from Dylan Connolly and Jason Marks saw Bray come from behind to win for the fourth succesive league game to keep them third in the table.

It also marked a first league win over Rovers in 18 matches stretching back to May 2011 as the visitors finished with ten men before a crowd of 2225 at the Carlisle Grounds.

Despite skipper Conor Kenna being free of suspension, Bray boss Harry Kenny kept faith with the same starting eleven that beat champions Dundalk 3-1 last week. Rovers made just the one change from their most recent league win over Sligo Rovers as Sam Bone came into central defence for the injured Danny Devine.

After a 10 minutes delay, Rovers were first to threaten after a tame start to the game on six minutes; Brandon Miele just unable to get up  high enough to meet Simon Madden’s excellent cross form the right.

And Rovers brought start was rewarded with a deserved lead goal on 10 minutes.

Brandon Miele threaded a sublime through ball for the run of Graham Burke down the inside left channel. Midfielder Burke was composure personified as he pulled the ball back perfectly for Darren Meenan who drove his shot to the roof of the net for his first league goal of the season.

Rovers then survived a right scramble in the area minutes later before ex-Hoop McCabe drilled a shot wide after his initial free kick rebound back off the Rovers wall to him.

But the visitors remained the better side and the carved another opening on 20 minutes.

Burke was again instrumental as he dunked a ball over the top for Gary Shaw who cut inside to shoot into the side netting.

Having struggled to really get into the game, Bray ought to have been level on the half hour.

Rovers keeper Tomer Chencinski could only parry a long-range drive from Aaron Greene with Ryan Brennan somehow shooting the rebound off a post with the goal at his mercy. 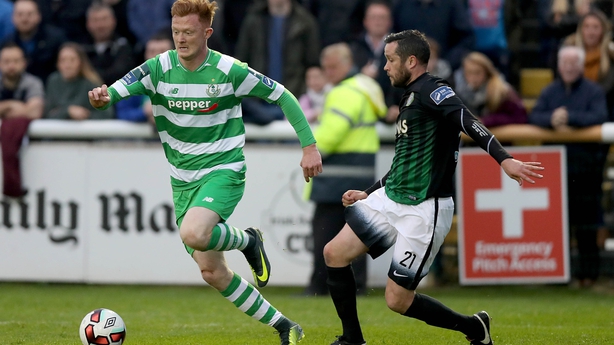 They soon made amends, though, as Bray equalised on 41 minutes.

Keith Buckley was the instigator, working a one-two with Brennan down the right to cross. And into the box arrived McCabe to plant a firm header to the net.

That turned the game on its head as Bray scored twice more before the interval.

Wanderers were ahead in the first minute of added time at the end of the half when Greene sent Connolly running through the home defence to draw Chencinski and lift the ball to the net.

Two minutes later, Chencinski conceded a penalty after clashing with Brennan after he killed the ball.

McCabe confidently sent Chencinski the wrong way from the spot as Rovers trooped off at the interval bewildered at the turnaround.

And it got no better for Rovers in the second half as they conceded again on 59 minutes.

McCabe fed Connolly who darted into the box. The winger’s cross ran out to the advancing Jason Marks whose shot was deflected to the net off Madden.

Rovers’ bad night was compounded when Michael O’Connor was shown a straight red card on 81 minutes after a foul on Connolly.

Fellow substitute James Doona got Rovers second goal with a crisp right-foot finish form the edge of the area on six minutes later.