The Germany midfielder fired home a 71st-minute winner to finally kill off battling Boro, who had dragged themselves back into the game when Alvaro Negredo cancelled out Alexis Sanchez's first-half free-kick five minutes after the restart.

The 2-1 triumph - the Gunners' first league away win for three months - lifted Arsene Wenger's men seven points behind fourth-placed Manchester City, with a game in hand.

However, the visitors had to fight all the way in front of a crowd of 31,298 at the Riverside, with Steve Agnew's Boro making up for what they may lack in quality with a committed display which for long periods looked like earning them tangible reward.

They kicked off knowing another failure to win - they have not managed a league victory since 17 December - would represent a major blow to their dwindling survival hopes, although buoyed by the knowledge that Arsenal had not collected three points on the road since they won at Swansea on 14 January.

Equally, the visitors could not afford to allow that record to continue if they are to stand any chance of securing a 20th consecutive Champions League berth, although the vastly differing levels of ambition were not apparent for much of the first half.

The home side started brightly, with skipper Grant Leadbitter going just wide from distance with four minutes gone and high over from similar range 21 minutes later. 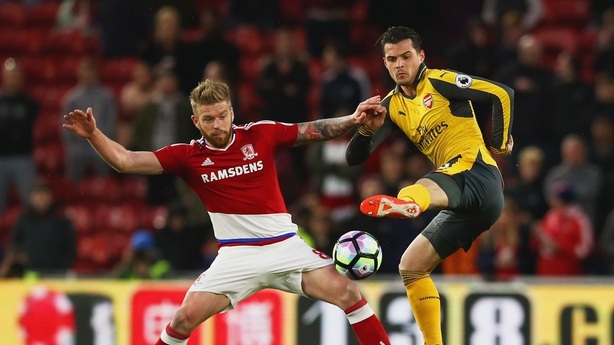 In the meantime, striker Negredo had attempted to catch returning goalkeeper Petr Cech off his line from all of 40 yards and was not too far off target, while Marten de Roon saw a header correctly ruled out for offside.

But Antonio Barragan had to head Aaron Ramsey's 28th-minute volley off the line before goalkeeper Brad Guzan gratefully clutched Sanchez's attempt to his chest after it reared up off the rain-soaked turf seconds later.

The deadlock was broken three minutes before the break when, after Granit Xhaka had been felled by Adam Clayton 20 yards out, Sanchez curled the resulting free-kick past the static Guzan to give his side the lead.

Boro resumed in determined fashion with Stewart Downing lining up on the right, enjoying early success, and it was he who picked out Negredo's 50th-minute run into the box for the Spaniard to stab home a precious equaliser.

Downing was presented with a half-chance to fire his side ahead five minutes later when Nacho Monreal could only help substitute George Friend's cross into his path, but he blazed high and wide from a tight angle.

Agnew's men would have been in front with 61 minutes gone had it not been for Cech, who parried central defender Daniel Ayala's close-range header after Friend had turned Downing's free-kick back across goal.

However, it was Arsenal who restored their advantage with 19 minutes remaining when Ramsey laid off Sanchez's cross for Ozil, who had been enduring a quiet evening, to fire past the helpless Guzan, who denied Alex Oxlade-Chamberlain a third at the death.