Willie Boland took charge of his first game at the Markets Field and opted to make no changes to the side that beat St. Pat’s in Inchicore last Friday.

Fresh off the back of a shock win against Shamrock Rovers last week, Pete Mahon brought in Ryan McEvoy to replace the injured Gavin Brennan.

Before the visitors could get a foothold in the game, Limerick took the lead after four minutes.

The hosts were awarded a corner kick on the left flank. Captain Shane Duggan delivered the cross and found his frontman Rodrigo Tosi peeling off his marker at the near post and he rose to glance his header across goal and into the net.

Probably still shocked by the pace at which Limerick were moving the ball, Drogs found themselves further behind four minutes later.

Good interplay in midfield freed Chiedozie Ogbene into space. He took a touch before shooting at goal with his right boot, only for it to strike his opposite winger Chris Mulhall.

The deflection was crucial - as the ball rolled past an already committed Stephen McGuinness to give the Blues a dream start.

Struggling to get out of their own half at times, United were pinned back by the pace of Ogbene on the left, while simultaneously being held off the ball by the physicality of the Brazilian Tosi.

In a week where penalty kicks have been prominent in managers’ thoughts, Limerick had claims for three of their own in the first half hour.

First, a handball inside the box was waved away, before Ogbene went down under a challenge. A second handball followed moments after, but again, Graham Kelly wasn’t interested.

Ogbene really impressed in front of former boss John Caulfield and got a goal of his own five minutes into the second half.

A long ball over the top found Ogbene one-on-one. He fell under a challenge inside the box, but got back up, cut inside and shot to the roof of the net to put the result beyond doubt. 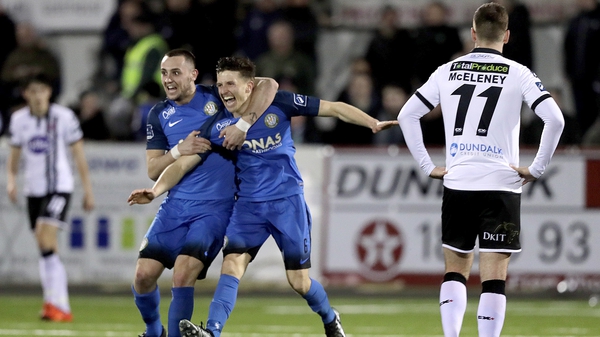