Real Madrid coach Zinedine Zidane hailed the mentality of his side after a brace from Cristiano Ronaldo saw them come from behind to beat 10-man Bayern Munich 2-1 in the first leg of their Champions League quarter-final - but warned the job is not done yet.

Bayern, who had thrashed English club Arsenal 10-2 on aggregate to take their place in the last eight, took the lead at the Allianz Arena midway through the first half when Arturo Vidal crashed in a bullet header from a corner.

However, the Chile midfielder then sent a penalty over the crossbar which would have doubled the German team's advantage in stoppage time before the break.

It proved a costly miss as Ronaldo swept in an equaliser two minutes into the second half before Bayern's defensive midfielder Javi Martinez picked up two quick cautions to leave the home side a player down for the final half-hour. 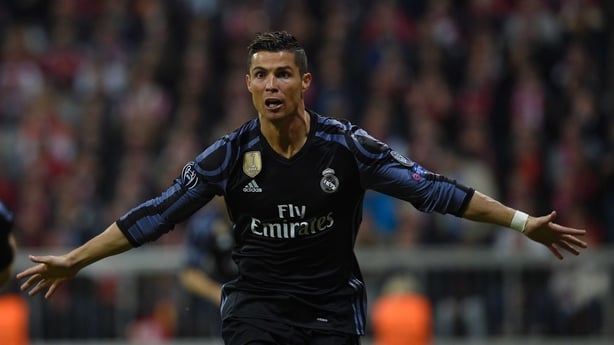 After some brilliant saves from Manuel Neuer, Ronaldo took his tally to 100 European goals when he stabbed the ball in with 13 minutes left which puts the European champions in the driving seat ahead of next week's return leg at the Bernabeu.

Zidane, however, warned against any complacency, despite the confident performance.

"A tie is never decided in the first leg, but we played a good match. We probably could have scored one or two more goals, but we're very happy," the Real coach said at a press conference.

"We showed the willingness to get a good result after the first half and if we had gone in at 2-0, it may have been a different match.

"But we showed patience and managed to get an equaliser, from then on, it was a different game as we showed more personality and won the ball back better."

Zidane continued: "It is not easy to play here, Bayern have great players and are a great team, but we still needed to play well in the second half and we also have to acknowledge how many saves Neuer had to make.

"I can't say that a third goal would have decided the tie already, and we will see about that next week.

" Zidane opted to take Gareth Bale off just before the hour, and revealed it was a precautionary measure aimed at keeping the Wales forward fully fit after his recent injury worries.

"Bale felt a tweak at half-time and I didn't want to take any risks. He doesn't feel so good, we hope it's nothing major," he said.

Bayern were missing Poland forward Robert Lewandowsi because of a shoulder injury, and lacked a cutting edge in the final third.

Manager Carlo Ancelotti, though, is determined to remain positive as he prepares to return to the Bernabeu for the first time since he left the Madrid club in 2015.

"We had no luck tonight and it was the small details which made the difference," the Italian coach said.

"We missed the penalty when we could have made it 2-0, then we conceded right at the start of the first half and that changed the match."

Ancelotti added: "Sometimes you miss a penalty, that was not the first one, and it will not be the last one, but we can build on the first half.

"It will be more difficult in Madrid, but we still have a chance, we are still alive.

"We will look to take our chance. We will try to do our best."